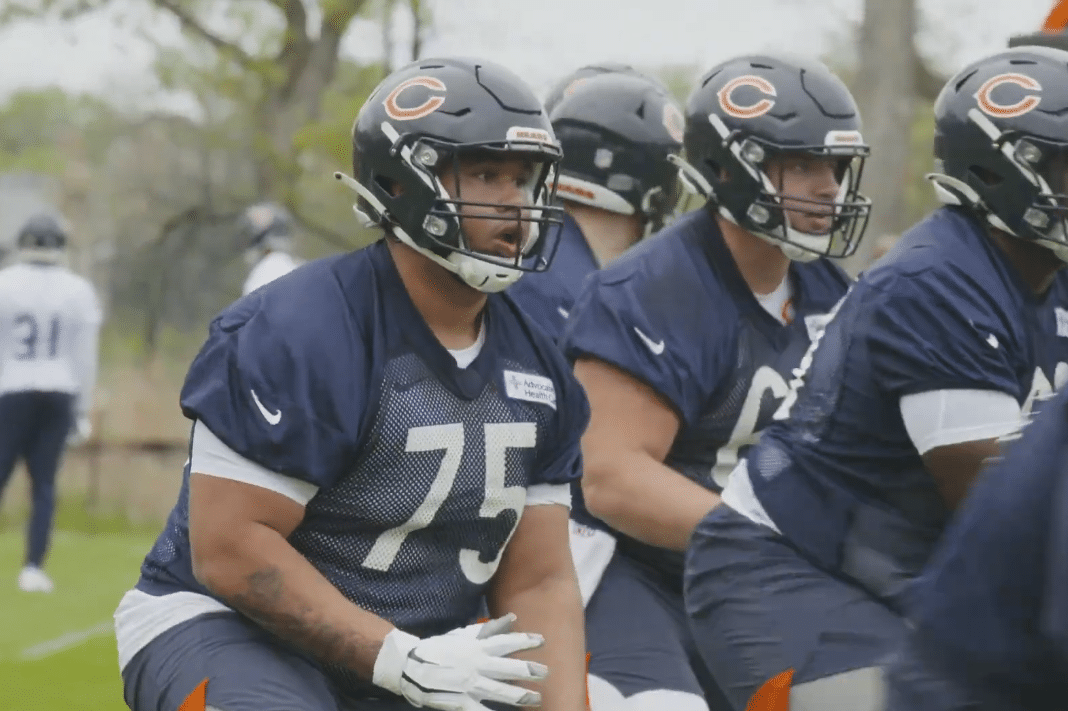 Here’s the thing. Tom Thayer knows a thing or two about offensive line play in the NFL. He played in the league for nine years, started 120 games, and won a Super Bowl with the Chicago Bears. So it is a safe bet that his standards are pretty high when it comes to identifying whether a young player has the goods to be successful at this level. That is what made his assessment of new Bears rookie Larry Borom stand out so much.

Remember that Borom was a 5th round pick back in April. A bit of a surprise choice considering the Bears had just selected Teven Jenkins in the 2nd. Why do that? GM Ryan Pace indicated it was purely a Best Player Available situation. They had a high grade on Borom. As in 2nd or 3rd round grades. Even as plans move forward with Jenkins as the presumptive left tackle, from the way Thayer talks he thinks it will end up being Borom.

“To me, right now I think the saving grace of that position is the fact that Larry Borom is playing so well. If Teven Jenkins came out and he was healthy (and) 100% ready to go and the way Larry Borom’s playing? I would probably play Teven Jenkins at right tackle.”

Understand that this is not a normal procedure for Thayer. He might express intrigue in players from time to time but he doesn’t have a history of outright praising them. Especially when they’re rookies. That should speak to just how much of an impression Borom is making. He wasn’t done either.

“So far in the early stages of training camp and the development of that position and what it takes in athleticism? I’ve seen it out of Larry Borom. That kind of excites me more than anything else.”

Head coach Matt Nagy said this week that Borom’s footwork was one of the big things they loved about him coming out of Missouri. That was when he still weighed around 350+ lbs. Since then he’s dropped to the 320 range. So now he’s lighter which allows his athleticism and quick feet to shine through even further.

“I got to say, David and Mully. Being out here every day and if you had no numbers on any of these guys and you saw Larry Borom break the huddle and go to the line of scrimmage as the left tackle? You would think, ‘Wow, this guy belongs there.’ He’s physically gifted. He’s a good athlete. He has really dedicated a lot of time and work into getting his body into shape for NFL competition. I can’t be more excited about any one player than I am about Larry.”

Conviction doesn’t get much stronger than that. Thayer is buying Borom stock in droves. He thinks the kid isn’t some kind of project the Bears might develop. He thinks the 5th rounder can play right now. Based on updates from training camp with solid showings against Khalil Mack and other starters? He might be onto something.

Tom Thayer isn’t the only one thinking this way

One person who hasn’t been shy about praising Borom is offensive line coach Juan Castillo. Now that by itself doesn’t mean much. Coaches tend to do that all the time. Yet it is the way Castillo has gone about it that should really raise eyebrows. Greg Braggs of Braggs In The Stands caught up with the veteran assistant and got this significant nugget.

Just had a nice conversation with Coach Castillo. It's still early but he said Larry Borom might just win a starting spot on the offensive line. 👀#StayTuned pic.twitter.com/2fAf9r8ast

Like Tom Thayer, Castillo knows everything there is to know about offensive line play. So he is probably seeing the exact same things with Borom. Many will find this hard to accept. The guy is a 5th round pick. Players drafted that late never start as rookies. At least not without some sort of position-wide catastrophe. Injuries to Teven Jenkins and Germain Ifedi could be categorized as such, but it seems Borom’s ascent had already begun before that.

He is doing what Nagy and the coaches love most.

Making the depth chart decision hard on them. They want the competition. They desire seeing guys push for playing time. Borom is doing that. Three preseason games and weeks of camp still remain. Yet it’s hard to ignore the way things are trending. Don’t be shocked if the starting offensive line has a surprise name inserted come opening night in Los Angeles.