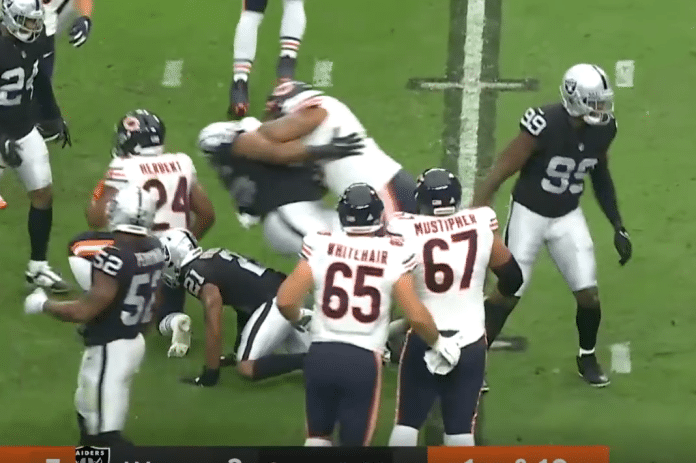 The Chicago Bears made an interesting decision a few months ago when they signed Elijah Wilkinson. It was clear they were looking to shake up their offensive tackle spots. The former Denver Broncos veteran was never a standout but they felt his experience and playing style fit what they were looking for. Unfortunately, he didn’t make the best first impression with some ugly blocks in the preseason.

Some argued that was because he’d been put at left tackle. A position he wasn’t used to. Wilkinson had performed exclusively at right tackle most of his career. Of course, he’d look out of place on the left side. People weren’t buying it. Including this writer. As it turns out, there may have been some validity to those statements. Germain Ifedi went down with a knee injury in the win over the Raiders on Sunday. Initial signs indicate an MCL sprain.

This forced Wilkinson to step into his spot.

#Bears have shifted philosophically and with personnel usage the last 2 weeks, so it's noteworthy 5 tight ends were brought in for a tryout Tuesday. Diving into that – plus Germain Ifedi could miss time with an MCL sprain.https://t.co/e4jK7E3wKD

If people review the tape, they’ll be surprised by what they saw. The veteran didn’t look overwhelmed. If anything, he played with the energy and attitude that this team sorely needs. Just look at this run play from the first half. It seems like a nice 7-yard gain, right? Nothing more. That is until you see big #70 come barrelling into frame and pancaking Raiders defensive tackle Darius Philon into oblivion.

That play was emblematic of the entire afternoon as the Bears offensive line imposed their will on Las Vegas. Yet it didn’t end there for Wilkinson. He also did a fine job in pass protection. In 12 head-to-head matchups against Raiders star defensive end Maxx Crosby, the big tackle didn’t allow a single pressure. He deserves a ton of credit for how he handled a tough situation.

If for no other reason than depth purposes. Had the Bears elected to release him, then they would’ve been stuck with Lachavious Simmons with Ifedi going down. Remember rookie Tevin Jenkins is already on Injured Reserves coming off back surgery. Larry Borom suffered a high ankle sprain. This serves as a reminder that there is no such thing as having too many bodies at one position.

He may not be a front-line starter, but Elijah Wilkinson is a serviceable backup. One who brings an aggressive mentality to the run game. Exactly what the Bears offense needs as they continue to help ease the burden on Justin Fields. He’ll be needed as Ifedi will likely miss multiple weeks with this injury. If he performs like he did last Sunday? Things should be fine.

He will certainly be tested in the games ahead.

The Green Bay Packers, Tampa Bay Buccaneers, San Francisco 49ers, and Pittsburgh Steelers all present considerable challenges in the trenches. Preston Smith? Shaq Barrett? Nick Bosa? T.J. Watt? Those are some frightening names he’ll have to block. As long as he doesn’t get railroaded, the Bears will be happy with that. Just don’t let Fields get killed and open some running lanes. This he can do.