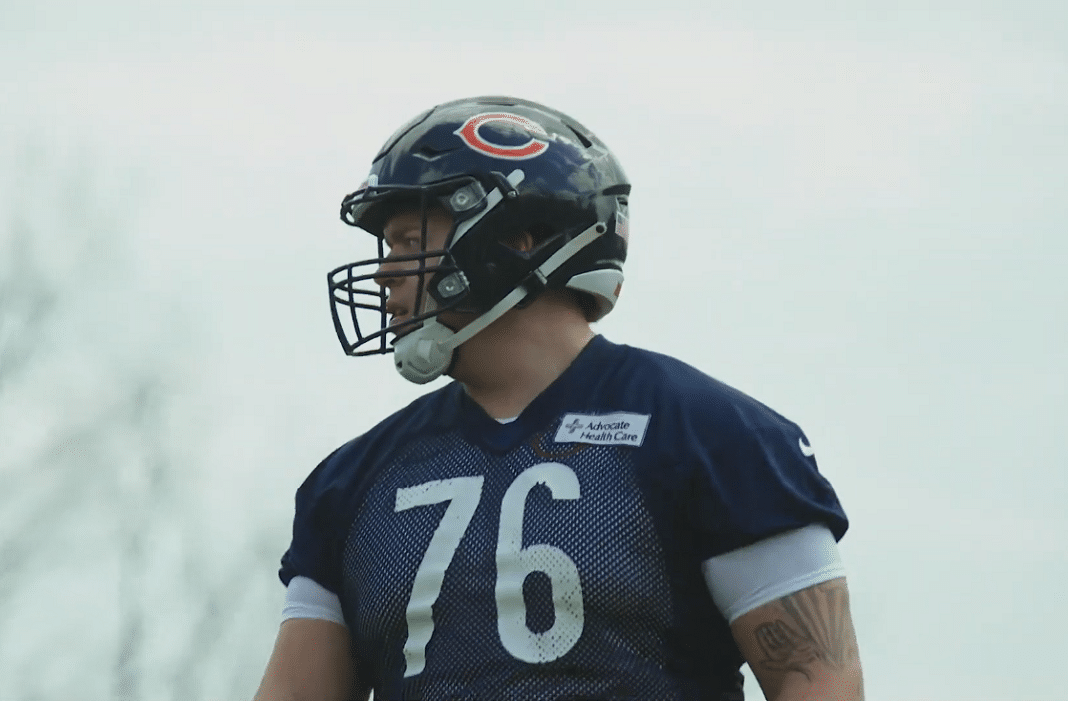 While Justin Fields is easily the most important draft pick the Chicago Bears have made in a long time, one can easily argue Teven Jenkins isn’t far behind. Keep this in mind. He is the first offensive tackle the team has drafted higher than the 6th round since 2013. That is not a misprint. It has been eight years since this organization invested a high draft choice in one of the most important positions in the NFL.

Better late than never. While Jenkins hasn’t garnered the headlines Fields has, he’s proven to be just as entertaining of a personality. Also like Fields, it seems he wasn’t expecting the Bears to draft him back in April. After a surprising fall out of the 1st round, most knew it was just a matter of time before the Oklahoma State standout heard his name called early on Day 2. GM Ryan Pace knew this too. So he enacted a plan to move up, jumping to the 39th pick in order to grab their guy.

That is when the phone call was made.

It was standard procedure from the Bears’ end. Head coach Matt Nagy placed the call in order to deliver the good news. Jenkins though had so many thoughts going through his head at the time. No doubt wondering when his time would come. That is why when the phone rang, he was momentarily confused. The caller ID stated it was coming from Illinois. He didn’t remember any team playing in Illinois. Watch him tell the story from the excellent “Meet The Rookies” series.

Probably far from the craziest story somebody can tell about their draft day experience. Jenkins will get a pass for this. He’d been swimming in the process for months. His head was somewhere else. Remembering the map of the United States probably wasn’t at the top of his priority list.

It involves a position switch. For most of his college career, he played right tackle. Most experts assumed that was where he’d played once the Bears drafted him. Then the team pulled a swerve. They released longtime veteran left tackle Charles Leno Jr., indicating that Jenkins would be moving over to that spot. A considerable gamble given his inexperience in that spot. Not to mention with the NFL in general.

That speaks to a lot of faith not only in his talent but also in the coaching prowess of Juan Castillo. The Bears’ offensive line coach has really enacted a shift in philosophy for this team since his arrival in 2020. Their focus is more on size and power now. Two things Teven Jenkins embodies. Throw in his understated athleticism and he has the makings of a genuine stud no matter which side of the line he plays on.

The rookie seems more than ready for the challenge.

He’s already chomping at the bit to get into pads. Bears rookies are to report for training camp on July 24th. Veterans will follow three days later. The first practice is scheduled for the 29th. Fan buzz is picking up fast. They’re anxious to see their favorite players in action again. This will also be the first real opportunity for guys like Jenkins to showcase what they can do.