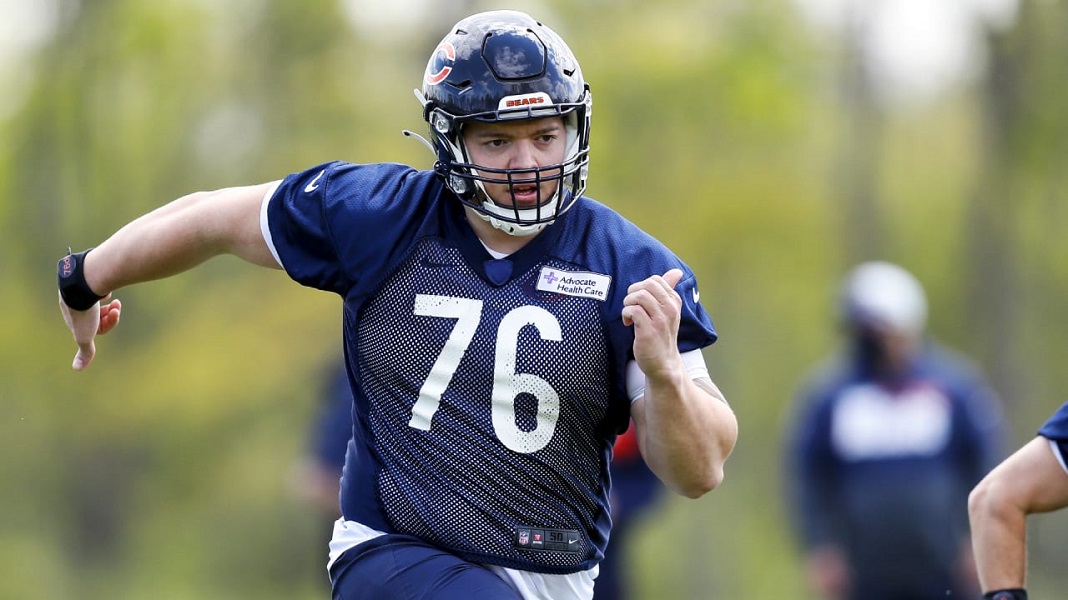 The Chicago Bears rookie class became the first to report for 2021 training camp on July 24th. This included their entire draft class headlined by quarterback Justin Fields. The team made sure to start the buzz by snapping some photographs of players arriving for work at Halas Hall. Most of them were nothing out of the ordinary. Fields was his usual stoic self and carrying his practice cleats. Andy Dalton was also there, sporting a sharp, new beard. Then there was Teven Jenkins.

The big 2nd round offensive tackle looked as advertised walking towards the building. Giant and bulky with a backpack that was clearly straining against his massive shoulders. He even carried a casual smirk when looking at the camera. That wasn’t the best part though. It was the fact he was casually carrying a 45-lbs weight in his right hand. Considering Halas Hall has one of the most state-of-the-art weight rooms in the NFL, this led to lots of questions.

Teven brought his own 45 plate to Rookie Camp 😂 from CHIBears

The comments from Bears fans are what make it even more priceless.

One said he definitely looks like an “I brought mine from home” kind of guy. Another ventured the idea that it was his personal pet. Someone even said that the weight is actually his pillow. Jokes aside, it is evident that Jenkins is arriving ready to work. That doesn’t just mean during the usual lifting sessions. Odds are he’ll have that weight in his room to do other exercises in his spare time.

This furthers the reputation of the 2021 draft class as a whole. Aside from the group being talented, they’ve also quickly shown another common trait. They’re all workers. Grinders as Jon Gruden would say. They put in more time than anybody because they’re aiming for something big in the NFL.

Teven Jenkins is an amazing study in contrast

Looking at him off the field? You’d honestly never guess who he really is. The guy has the personality of a goofball who loves regular hobbies like video games and other normal things. Then when it’s time football and the glasses come off? He morphs into a hulking beast intent on destruction. It would be easy to lose count of how many defenders he pancaked during his run at Oklahoma State.

The big obstacle for him is learning to play a new position. Teven Jenkins was almost exclusively a right tackle in college. Most expected that would be the position he plays in Chicago. Instead, the Bears decided to shift him over to the left side. A move made crystal clear when they released longtime starter Charles Leno Jr. While his ability is unquestionable, many view this move as a gamble.

Jenkins himself doesn’t seem to mind.

He’ll do whatever the team requires of him. Just like at Oklahoma State. If it takes an extra 45-lbs weight to accomplish his goals for 2021? Then so be it. Fans will finally get to see him in action when the pads go on for practices this coming week. It should be a fun ramp-up period for an interesting season.