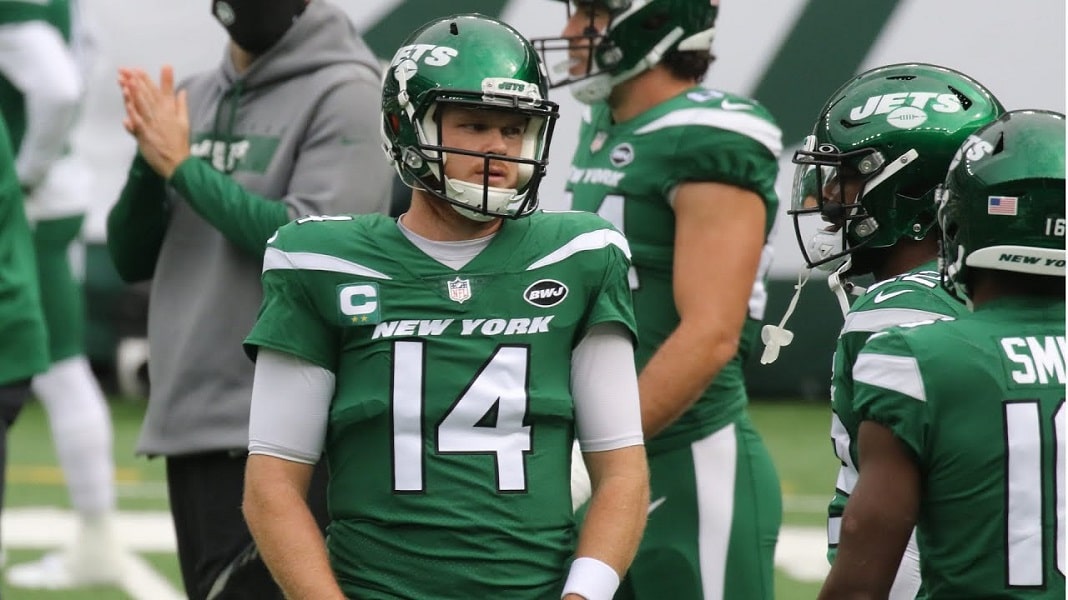 The quarterback market is never predictable in the NFL. This shouldn’t be new information to people. Just when you think they have an idea of how things will break, a curveball throws everything out of whack. Already the 2021 offseason has seen two considerable shocks. Matthew Stafford left Detroit after over a decade to join the Los Angeles Rams. Now Carson Wentz departs Philadelphia to join the Indianapolis Colts. All the while the Chicago Bears continuing waiting for their opportunity.

Who is it going to be? The hopes are for Deshaun Watson or Derek Carr. Realistic fans see it going differently. One name that has garnered a ton of momentum on the rumor mill since the Wentz trade is Sam Darnold. The former #3 overall pick is at a crossroads with the New York Jets. His first three seasons didn’t go well with the team. A good chunk of that wasn’t his fault, being saddled with a less-than-ideal supporting cast and inadequate coaching.

Now what will the Jets do?

Darnold has a year left on his rookie contract and is only 23-years old. He’s still plenty talented and a good kid. Does New York start fresh with a new quarterback or do they use their bounty of draft picks and cap space to build around him? Experts have speculated it’s more likely they go with a new QB with their #2 overall pick and trade Darnold. Hence the rumors involving the Bears. Jets ESPN beat writer Rich Cimini is hearing differently though.

“The Jets reportedly have fielded trade inquiries on Darnold from a handful of teams.

A source from one of those teams came away with the impression Darnold won’t be dealt. If that’s the case, the Jets can use their draft capital to build around him.”

He’s not the only one hearing the same. Ben Volin who covers the New England Patriots for the Boston Globe is hearing much the same. A general “inside buzz” that the Jets will keep Darnold and auction off the #2 pick to any team that needs a quarterback. Then they’ll use their bounty of selections to stack the roster.

*Watson’s camp getting frustrated they can’t force a trade

*Heinicke’s contract not what it seems

It does make sense to a degree. Even if the Jets decided to take a quarterback at #2, their roster is in no condition to support him. They have few pieces on offense to work with. Bringing in a QB now risks the young guy being too shellshocked by the time the roster is actually good enough to help. On the other hand, using all of those resources to focus on the roster with Darnold already in place could end up working in their favor.

What would this mean for the Chicago Bears though?

For some people, this is a relief. They want no part of Sam Darnold whom they view as another Mitch Trubisky. Somebody with plenty of talent but can’t process the speed of the NFL level enough to play with consistency. Darnold tends to have happy feet in the pocket and fails to find receivers when they’re open a lot. While constantly being under duress may have played a part in this, it’s hard to tell how much.

Are Matt Nagy and Ryan Pace prepared to stake their jobs on him? That seems unlikely. Not unless they feel confident they can fix his flaws. Or they feel they have no other choice. It’s possible this could all be smoke by the Jets in an attempt to drive up Darnold’s price. Then again Adam Schefter did say last month that it’s more likely New York keeps him than trades him.

If so, then the Bears’ pool of veteran options has shrunk a little more.

Unless somebody unexpected like Ben Roethlisberger or Matt Ryan suddenly becomes available within the next two months, the Chicago Bears could be faced with a difficult decision. Do they settle for a second-tier veteran option on the cheap in hopes they can squeeze a playoff run out of him? Or do they shift their focus to the draft and try to hit it big in the 1st round? One shouldn’t envy Pace and Nagy right now.