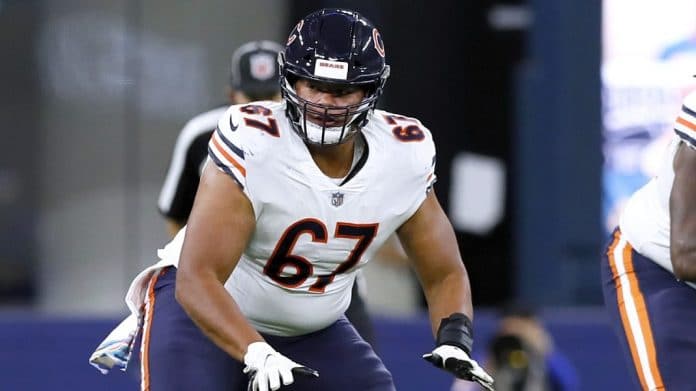 Easily one of the most pleasant surprises from the 2020 season was the ascent of Sam Mustipher at the center position. Nobody saw it coming. Why should they have? Mustipher was an undrafted free agent in 2019 and started last year on the practice squad. Nobody in their right mind would’ve predicted he’d rise to become the unquestioned starter coming into this season.

Yet that is what happened. Injuries across the offensive line included both Cody Whitehair and James Daniels. That left the team without a center. Thus Mustipher was called on in an emergency to face the New Orleans Saints. He played well. After suffering an injury of his own, the Bears decided to shake things up during the bye week. Among their big changes was making him the permanent starter at center, moving Whitehair to left guard.

The results were almost immediate.

In the final six games of the regular season, the Bears topped 100 yards rushing in every single contest. They also allowed only 11 sacks. Given all that had happened, it was a remarkable midseason turnaround. One in which Mustipher got a ton of credit. Both for his efficiency in the middle and his leadership. His intelligence and command settled everything down, leading to instant improvement.

That is what capable centers do. However, not everything about his ascent went smoothly. Mustipher had his fair share of hiccups. One problem that emerged during the final stretch was how lacking he was in terms of power. A criticism that had followed him since Notre Dame. So it seems he used this offseason to focus on fixing that issue. The results have been noteworthy by his own admission.

The fact he answered questions with such poise, even using the first names of Bears reporters? It isn’t hard to recognize the confidence he’s feeling. Add the fact he reportedly gained 10 lbs of muscle mass certainly doesn’t hurt either. He sounds prepared. It is going to be interesting to see the fruits of his labor in the coming months.

Presuming he improves from where he was last season couple with the return of Daniels? The Bears have a legitimate chance to have one of the best interior trios of any offensive line in the NFL. Whitehair looked terrific at left guard and Daniels was playing his best football to date before tearing his pectoral. There is a lot of ability in that group. If Chicago can get something from their tackle spots, this offensive line could be solid.

That is why line coach Juan Castillo gets paid the big bucks.

He was the one who gave Sam Mustipher his opportunity. The kid didn’t disappoint. This team made their stance clear on him when they made zero noteworthy additions at center in the offseason. Barring something unexpected, this is his line. It is up to him to elevate it as far as he can. He keeps saying his goal is to be one of the best. This is his chance to prove it.