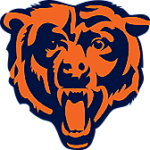 The 2020 Chicago Bears roster is loaded with talent on one side of the ball. As for the other side, they could use some work. Following up on 2019’s 8-8 finish, the Bears defense will remain in-tact in 2020. The only two significant changes to the defense will be Eddie Goldman’s decision to sit out for COVID-19 reasoning and the departure of CB Prince Amukamara. Goldman is a big loss. His presence, combined with Akiem Hicks, is what made the Bears run defense in 2019 one of the best in the league. Hicks missed a big chunk of last season due to injury, a factor that contributed heavily to the team’s poor finish.

Offensively, the storyline will revolve around if and when Nick Foles is named the starting QB. Foles was acquired from the Jacksonville Jaguars in the offseason after Mitchell Trubisky struggled in 2019. It wasn’t just Trubisky who struggled in 2019. Matt Nagy struggled, David Montgomery struggled, the entire offense was in the basement (29th overall) of team offensive rankings. The only success story on offense was Allen Robinson. With the offense playing poor, combining with insurmountable injuries on defense, the 8-8 result was no surprise to anyone.

The Bears’ coaching staff will have several new faces on the sidelines this season, with most of them being on the offensive side of the ball. For starters, Head Coach Matt Nagy is bringing Bill Lazor to be the offensive coordinator and John DeFilippo as the team’s QB coach. After a tough year for the offensive line, Juan Castillo was brought in to coach them.

As far as big names go, the Bears only had one on offense. After two years of watching Mitch Trubisky struggle, Head Coach Matt Nagy brought in Nick Foles. Foles and Nagy have a history that stretches back to when Foles entered the league with the Eagles. One story involves Nagy lending his car To Foles after he was selected because he still did not have one.

Nagy wanted Foles because of the familiarity and the strong relationship the two have. Foles is a Super Bowl champion and Super Bowl MVP, giving the Bears playoff experience and leadership experience. The Bears have a team leader in Khalil Mack but desperately need a leader on offense.

Nick Foles and Mitch Trubisky now make up a quarterback room looking for any signs of success. According to Pro Football Reference, Foles had 71 career touchdowns before he arrived in Chicago.

His best season was in 2013 when he threw 27 touchdowns and went to the pro bowl. Foles also carries a 4-2 record in the playoffs, including a victory in the wild-card round over the Bears in 2018.

As far as the wide receiver talent, the Bears still have a high-end, number one option in Allen Robinson. Lining up with him will be Anthony Miller, Javon Wims, and fifth-round draft pick Darnell Mooney.

Allen Robinson, far and away from the best wide receiver on the team, has expressed interest in leaving the team but has continued to excel while scoring 21 TDs and catching over 300 balls throughout his career with the Bears.

Robinson is no stranger to poor quarterback play. He spent his first few seasons with the Jaguars and QB Blake Bortles. If you don’t know who that is, my point has been made.

That being said, he shined bright in a dimly lit offensive room for the Bears in 2019. In 2020, he’s doing the same thing. This year, however, he has publicly endorsed the idea of leaving the team in free agency. Who could blame him? He is as talented as they come and is not being allowed to shine.

This offseason, Robinson can be placed on the franchise tag (roughly a $16-17 million salary for next year). He can be traded or extended. The least likely of those outcomes is the extension, and it’s not particularly close.

As far as Anthony Miller goes, he’s disappointed in 2020. Dropped passes in key situations tend to be his downfall, and he’s had a handful this year. Miller, much like Robinson, has endorsed the idea of leaving the Bears by favoriting tweets surrounding that idea.

All of that being said, Miller’s athleticism is off the charts, and he has the opportunity to be a star. In the cases of most NFL receivers, it takes a few years to develop into a high-end target.

Miller has two TD receptions to pair with 377 receiving yards.

Fifth-round draft pick Darnell Mooney is showing signs of promise. Mooney has been the Bears’ serious threat this season, despite having two quarterbacks that are consistently inaccurate with the deep ball.

Mooney has caught a pair of touchdowns so far this season, racking up 385 total yards. His speed and athleticism should give Bears’ fans a sense of hope for the future, especially if the team chooses to move on from Robinson this offseason. As it stands right now, that appears to be likely.

The Bears don’t have depth at running back, whereas most teams in the playoff picture do. This continues to be a major area of concern in an area where stud backs can be found everywhere! The Jaguars found James Robinson, the Steelers found James Connor, the Chiefs traded Kareem Hunt and then drafted Clyde Edwards Elaire, and worst of all, the Packers found Aaron Jones and developed him into a full-blown star.

My point is that the Bears have had options to bulk up their backfield, and they have not done it. Why? David Montgomery has been a good player. He’s a strong back that plays his heart out while giving us a few great games here and there.

The issue is, he’s not good enough to cover the average to below-average QB play. It’s worth noting that teams competing for a Super Bowl have two running backs that they can rely on. It’s necessary for today’s NFL.

The Bears used to have a must-see TV level defense. Unfortunately, the offense completely takes the team’s narrative in the opposite direction. The Bears’ defense is headlined by three NFL All-Pro players: Edge Rusher Khalil Mack, safety Eddie Jackson, and Cornerback Kyle Fuller.

In my opinion, that list should stretch to four all-pros because Akiem Hicks is more than deserving. Either way, the core four make up one of the best defenses in franchise history.

Let’s start with Khalil Mack. Last season, Mack managed 8.5 sacks while fighting through some nagging injuries. This season, he is struggling with injuries again, and the numbers are reflecting it. Weeks 9-12, Mack has not managed a single sack. It’s been a struggle for him when Akiem Hicks is not playing. Same story, different season.

Mack is in his third year with the Bears and is their best overall player. The three-time all-pro recorded 12.5 sacks in 2018, the year the Bears won the division and made it to the playoffs.

Hicks is the engine to the Bears’ defense and, without a doubt, a leader in the locker room. In 2016, Hicks joined the Bears and played in all 16 games. He would do the same in the following two seasons before a serious elbow injury would end his season after five games in 2019.

Hicks has 39 combined tackles to show for it.

When Hicks doesn’t play, the Bears tend to lose. He’s a free agent after 2021.

When you combine these two pass rushers with a secondary of Fuller, Jackson, and rookie standout Jaylon Johnson, you’re going to see results. The Bears’ defense is the sole reason they are winning games and are in games this season, as the offense has taken another step back.

A big reason for these inflated stats is because the offense can’t stay on the field. The constant three-and-outs, punts, and lack of scoring put a crazy amount of added stress on the defense.

The issue that comes to mind that goes without excuse is the lack of interceptions and turnovers. In 2018, the defense forced turnovers in 14/16 games played. They had forced the same amount of turnovers through four weeks (11) that year as they have through 11 games in 2020.

Jackson is a solid safety who has shown what his ceiling can be. The issue with him this season is missed tackles and lack of game-changing interceptions. The Bears rely on those interceptions to win close games. Although that may not be a recipe for success, that’s who the Bears are. Without those turnovers, the offense doesn’t get the field position they need to succeed.

The Bears’ linebackers are playing well this season, especially Roquan Smith. At one point, Smith was the leading tackler in the NFL. Smith has 101 total tackles and 15 tackles for loss through 11 games in 2020. Smith is playing at an all-pro level. Without a doubt, he’s been the best player for the Bears in 2020.

This is his third season in the league, and it should be his first as a pro-bowler.

Coming into the season, questions were swirling around who the kicker would be. The Bears signed Cairo Santos, and the rest is history.

According to NFL.com, Santos is perfect on extra points (20/20) this season, and he’s a big reason the special teams unit is second in the league in scoring. Santos is also 90% on field goals this season.

The other two big pieces on special teams are Tarik Cohen and Cordarrelle Patterson. Cohen tore his ACL very early in the year, and Tedd Ginn Jr. took over. He averaged 4.8 yards per return and lost his job to DeAndre Carter and sometimes Anthony Miller.

Carter was picked up off of waivers from Houston. He averages 9.5 yards per return.

There is no question the Bears miss Cohen. He is another look on offense, and he’s also a threat on punt returns. Cohen signed an extension this past offseason and was compensated for performing at multiple spots.

Cordarrelle Patterson is one of the best kick return guys in the league. He has a kickoff return for a score this season against his former team, the Minnesota Vikings. Patterson is averaging 29.6 yards per kick return through 11 weeks.

What is the team’s biggest need on offense?

There are a lot of them, but the answer is clearly a quarterback. In today’s NFL, if you don’t have that position figured out, it doesn’t matter how good your other positions look. The Bears have two backup QBs who both present detrimental actions to the offense as a whole.

What QBs should the Bears pursue?

First things first, they need to draft a quarterback in 2021. But if they want to compete in 2021, their current options will not get it done. Taysom Hill, Ryan Fitzpatrick, Dak Prescott would be ideal options for the Bears to be in contention next season.

What is the team’s biggest need on defense?

The Bears need a pass rusher. The problem is, Robert Quinn was given a large contract worth up to $75 million and has not lived up to it. Quinn has forced one turnover in 2020, and it came in his first snap as a Bear. Since then, mostly crickets.

Will the Bears trade any of their core Defensive players?

Well, it is certainly possible because Hicks and Fuller are both due for massive paydays after 2021. The Bears are facing some cap issues, and with all of their disastrous issues on offense, it’s likely one big piece is moved.

Will the Bears fire Matt Nagy and Ryan Pace?

This is a tricky question, but it’s certainly trending in that direction. If the Bears finish under .500 and have another embarrassing loss or two in 2020, everything is on the table. Nagy has two years left on his contract, and Pace has one.