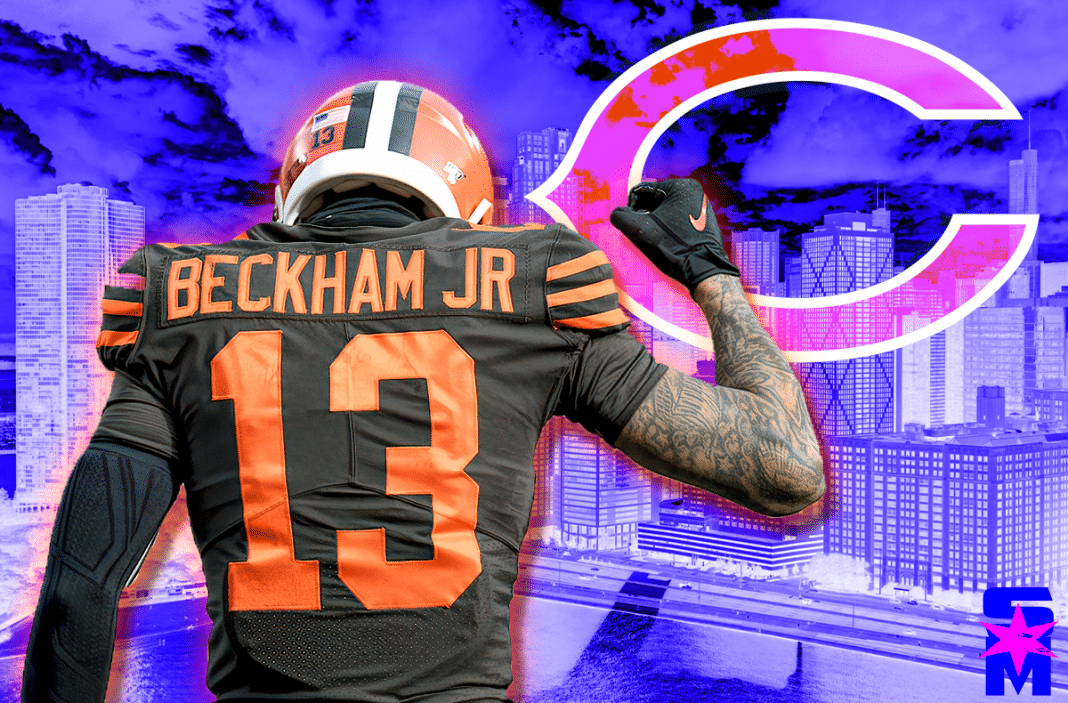 The Chicago Bears haven’t made a player-for-player sort of trade since all the way back in 2012 when they swapped Tyler Clutts for Sherrick McManis from Houston. Pretty good. Since then it’s been strictly the classics. Draft pick for player or player for a draft pick. Could GM Ryan Pace finally break that streak going into the 2021 season? Somebody out there thinks he should. Who would the target be? A certain somebody named Odell Beckham Jr.

Sounds crazy when first hearing it, right? Bruce Gagnon of Bleacher Report doesn’t think so. When examining possible trades to help the Cleveland Browns prepare for a possible Super Bowl run, he came up with something either creative or insane. It involves a player-for-player swap. Most likely involving some draft picks as well. The former Pro Bowl wide receiver would come to Chicago in exchange for something the Browns need desperately.

Y’all are going to say the Cleveland Browns aren’t trading Beckham and the Chicago Bears aren’t trading Hicks. Fine, but this is a deal the Browns would be silly not to make if the Bears were game. They were extremely successful without Beckham down the stretch last season, and they could desperately use more help in the interior defensive line.

Larry Ogunjobi and Sheldon Richardson are gone at that position. Malik Jackson signed on this offseason, and Andrew Billings is back after a COVID-19 opt-out, but the former is 31 and has started just seven games over the last two years, while the latter didn’t return in ideal football shape.”

This is such a fascinating idea.

It would be easy to say the Bears would never do this but that just isn’t true. Remember they considered trading Hicks earlier this offseason. Nothing preferable came across their desk so the defensive end was kept aboard. He is a free agent next season and wants to stay in Chicago. As for Beckham? His place in Cleveland was brought into question after what happened last season.

The star receiver seemed to struggle through the first seven games, not finding much chemistry with Baker Mayfield. Then he tragically tore his ACL. While bad for him, the Browns didn’t even notice his absence. They went 6-3 in their final stretch that season without him. Mayfield threw 11 touchdowns and just one interception in that sequence. This made many wonder if the team needed Beckham and his sizable contract anymore.

Is Odell Beckham Jr. worth the risk for the Bears?

Here are the facts. Beckham is known for being a bit of a difficult personality to deal with. He’s coming off a major knee injury and wasn’t at his best last season. He also carries a hefty contract at around $18 million per year. However, he’s still just 28-years old. He had over 1,000 yards in 2019. When he is on? The guy is unquestionably one of the best in the NFL. Most importantly though is that contract. While expensive, it does come with something else. Security.

There are three seasons left on that deal at a relatively modest $15 million per year against the cap. Don’t forget the Bears still haven’t reached any sort of long-term agreement with Allen Robinson. He is slated to reach free agency next offseason. Trading for Odell Beckham would give the Bears their best receiving trio in years and then somebody with credibility that Justin Fields can throw to if and when Robinson leaves.

As for the Hicks situation?

Losing the defensive end would be a tough blow for the Bears’ defense. Both on and off the field. That said, no position is better equipped to survive such a loss than their defensive line. They’d still have Mario Edwards Jr. and Angelo Blackson to help fill the void alongside Eddie Goldman and Bilal Nichols. Having a good defense is fun, but this has to be about Fields and his future. Beckham is somebody who can help make him better, provided he is healthy and committed to the idea.

Not that any of this will likely happen.