Last season was a frustrating one for the entire Chicago Bears offense. Few more so than Cole Kmet. He had a solid year with 612 yards, but he and others can’t help but feel he still underachieved. Part of the problem was a lack of chemistry with Justin Fields. Much of that was due to the still-baffling decision by head coach Matt Nagy not to give the young quarterback more work with the first-team offense in training camp.

It took weeks before the tight end and quarterback finally got on the same page. Everything clicked on Monday Night Football against the Pittsburgh Steelers, where they connected six times for 87 yards. It was Fields’ best performance of the season. While the Bears sadly lost on a late collapse by the defense, the progress was encouraging. Kmet went to Fields after the game, insisting it was a performance they could build on.

The Cole Kmet and Justin Fields connection is still growing.

They worked out together often during the offseason, but it goes beyond that. There was strong evidence of it on Thursday. Several Bears players visited Wrigley Field, where they participated in batting practice. A competition quickly developed to see who could hit the most home runs. Fields, who played excellent baseball in high school, smacked two. However, Kmet played baseball at Notre Dame. He ended up with three, winning the battle. The two had a fun little communication on Instagram after the visit. 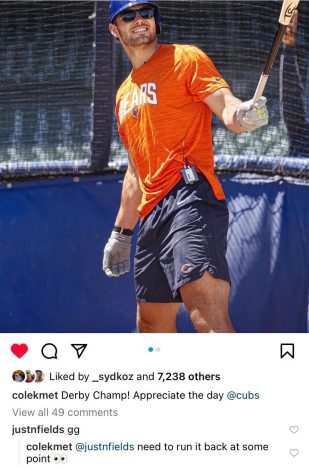 It might seem like such a small thing. Yet it’s such small moments that help cement chemistry between two individuals. Justin Fields and Cole Kmet are getting to know each other. The more each of them understands how the other thinks, the more potent their combination has a chance to become on Sundays. Bears fans got a glimpse of what it could be in Pittsburgh before the quarterback got injured the following week. There is no telling what they can accomplish in a new offense that is geared to help maximize both of them.

Bill Parcells Already Has A Solution To Fix Justin Fields

People are debating what is wrong with Justin Fields. Sure they didn't expect the Chicago Bears quarterback to light...

The Chicago Bears knew they had to find help at wide receiver for Justin Fields. GM Ryan Poles had...

The Chicago Bears passing game is a mess. People are pointing in every direction, trying to find the source....

Nobody expected the Chicago Bears to be 2-1 with September coming to a close. Yet here they are. Despite...

People Missed How Good Jaquan Brisker Was Vs. Houston

The Chicago Bears had multiple heroes in their win over the Houston Texans. The two men at the top...

Thoughts And Observations From The Bears’ Ugly Win Over The Texans

I was at a wedding in Toronto this weekend, so I missed the game live.  When I finally sat...

Robert Quinn Had The Perfect Name For The Bears’ Offense

The Chicago Bears offense has been difficult to digest for fans through the first three weeks. After so many...

The Chicago Bears weren't able to reach an agreement with Roquan Smith on a new contract extension. It is...