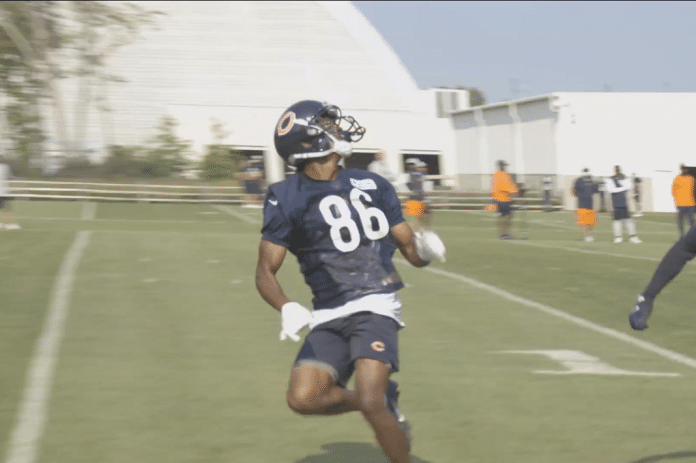 Back at the end of July, the Chicago Bears held a tryout right before the start of training camp. One name who made a positive impression that led to a contract was Jon’Vea Johnson. You’ll be forgiven if you’ve never heard of him. Johnson is the son of former NFL receiver Jason Johnson. He had a fairly productive run at Toledo in college before signing with the Dallas Cowboys as an undrafted free agent in 2019.

Sadly a strong start to his first training camp ended with a shoulder injury that saw him get cut. From there he bounced on and off the practice squad through 2020, failing to crack the roster. He then signed with Jacksonville earlier this year but was cut again after two months. So he’s gotten the harshest part of the NFL experience. That doesn’t seem to have deterred him though. By most accounts, the 25-year old is emerging more and more as days go by at Halas Hall.

Whew. Justin Fields with a dime in the end zone to Jon’Vea Johnson for a TD. Second-Straight day they have connected for a long TD. #Bears

Everybody knows training camp is a time for optimism.

Is Johnson another of those guys who show it in practice but disappear in games? That is hard to say. Based on his draft reports, evaluators saw somebody with athletic upside. He was clocked at a 4.38 in the 40-yard dash during his pro day. So he’s definitely fast. He also displayed reliable hands and an uncanny knack for putting the ball in the end zone. Of the 114 catches he made in his final three seasons at Toledo, 24 of them were touchdowns.

The primary concerns with him centered on his route running. It was considered raw and clunky. Disciplined defensive backs found it too easy to cover him when he went in and out of his breaks. Combine that with a 5’10, 188 lbs frame? That would explain why he hasn’t latched on to a roster yet. Still, route running can be learned. It is also possible to design plays around somebody with his speed.

Jon’Vea Johnson is seeking some redemption

He had a huge opportunity back in 2019 to crack the Cowboys’ roster. Unfortunately, his preseason performance didn’t stand out enough. Eight catches for 73 yards. Then the injury happened and that was that. To be fair, he got kind of a raw deal at that time. It’s hard to stand out with guys like Cooper Rush, Mike White, and Taryn Christion throwing you the football. This time around has a chance to be quite different.

While he won’t see any throws from starter Andy Dalton, Jon’Vea Johnson can look forward to lots of snaps with Justin Fields and Nick Foles. Both of whom are miles better than what he had in Dallas two years ago. He isn’t likely to get a better opportunity. Right now the competition for the bottom spots on the Bears wide receiver depth chart is fierce. Javon Wims, Riley Ridley, and Chris Lacy are other names who have taken turns making nice plays.

Johnson can’t afford to get comfortable.

The first preseason game is August 14th. There is a lot of time between then and now. Enough for Johnson to kill the momentum he’s started to build. He should know this better than anybody. This isn’t the time to pat himself on the back. One thing is for certain. He is an easy story to cheer for. Fans always love an underdog and he epitomizes that more than most. When the Bears face off against Miami, keep an eye out for #86.