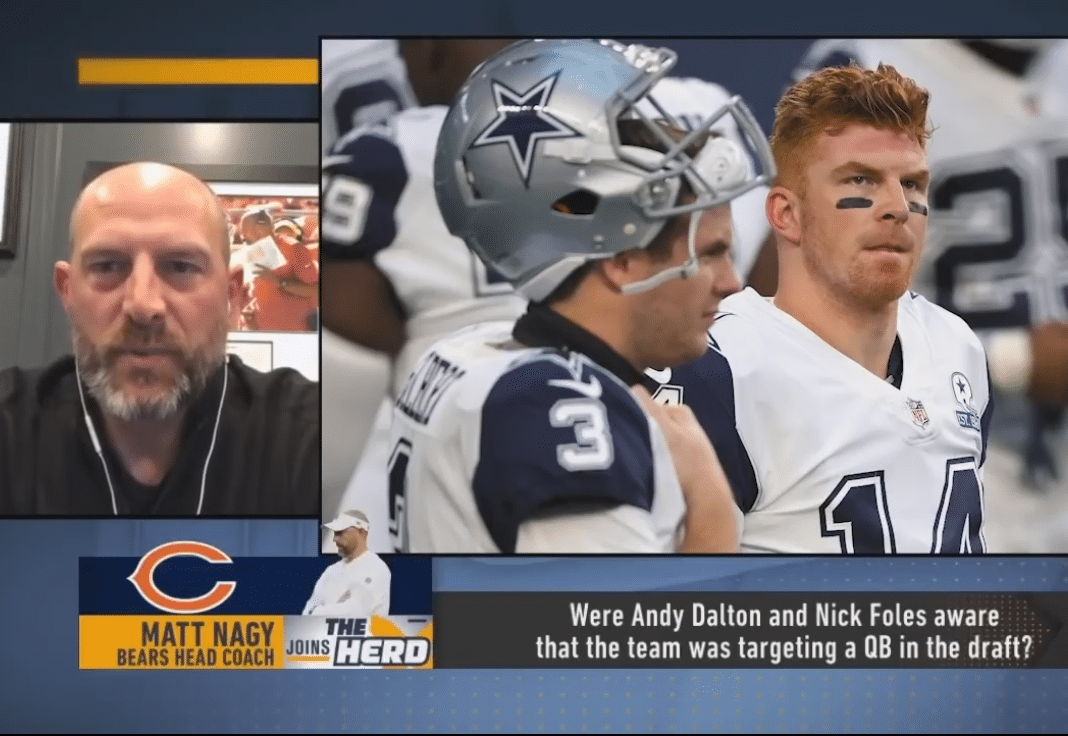 Everybody remembers the famous story. Four years ago, the Chicago Bears signed Mike Glennon to a three-year deal with the promise that he would be the starting quarterback. Then a month later he watched live on TV as the team drafted Mitch Trubisky #2 overall. He’d had no warning before it happened, which inevitably created an awkward situation the team never managed to clear up. So when a second opportunity to draft a QB early came around, new head coach Matt Nagy made sure that wouldn’t happen again.

Two months ago, Chicago signed veteran Andy Dalton in free agency. The former three-time Pro Bowler agreed to the deal because he had assurances he would be the starter in 2021. Yet anybody with common sense knew the Bears were likely going to draft a quarterback. Was the same situation repeating itself? Nagy made sure that wasn’t the case. He explained what happened when he spoke with Dalton in the hours before the draft on The Herd with Colin Cowherd.

Besides, it’s not like he couldn’t put the pieces together. Unlike Glennon, the Bears only signed him to a one-year deal for $10 million. Nothing about that screams long-term investment. It was plain as day they had other plans in mind besides just signing him. That doesn’t mean their original promise was invalid. They agreed to give him the 2021 season to start and GM Ryan Pace reiterated that promise even right after the Bears drafted Justin Fields.

Everything points to Nagy having a clear plan in mind. He wants to avoid throwing Fields into the action right away. The more time he can buy to let the rookie absorb the playbook and prepare for the NFL speed, the better. That is where Dalton comes in. He can start for the time being. Keep the seat warm and hopefully, keep the team competitive until Fields is ready to go.

Matt Nagy deserves the benefit of the doubt here

He’s seen this process play out before. Most will point to the Kansas City Chiefs using the model back in 2017 with Patrick Mahomes. He sat almost the entire season behind Alex Smith as a rookie. Then in 2018 he took over the mantle and began his ascent to superstardom. It didn’t just happen there though. Nagy saw a similar process play out in Philadelphia where the Eagles signed Michael Vick to back up Donovan McNabb.

Vick had spent two years in prison and needed time to regain his football form. All of 2009 was spent behind McNabb. Then in 2010, McNabb was traded to Washington and Vick handed the starting job. He responded with a Pro Bowl season in which he threw for over 3,000 yards with 21 touchdowns and six interceptions in just 12 games. He also rushed for over 600 yards and nine touchdowns. It was the best all-around season of his career. So Matt Nagy has seen this formula work multiple times before.

It is hard to question his thinking.

Yes, Fields is more talented than Dalton. Yes, he’s the future of this team. Does that mean he’s ready? Not necessarily. By doing it this way, the Bears are allowing their young QB to learn the offense with the added benefit of not taking the hits on the field. Some fans may not like this plan. They feel it’s unnecessary. Yet the organization is sticking to it. Fields’ time will come, just not right away.