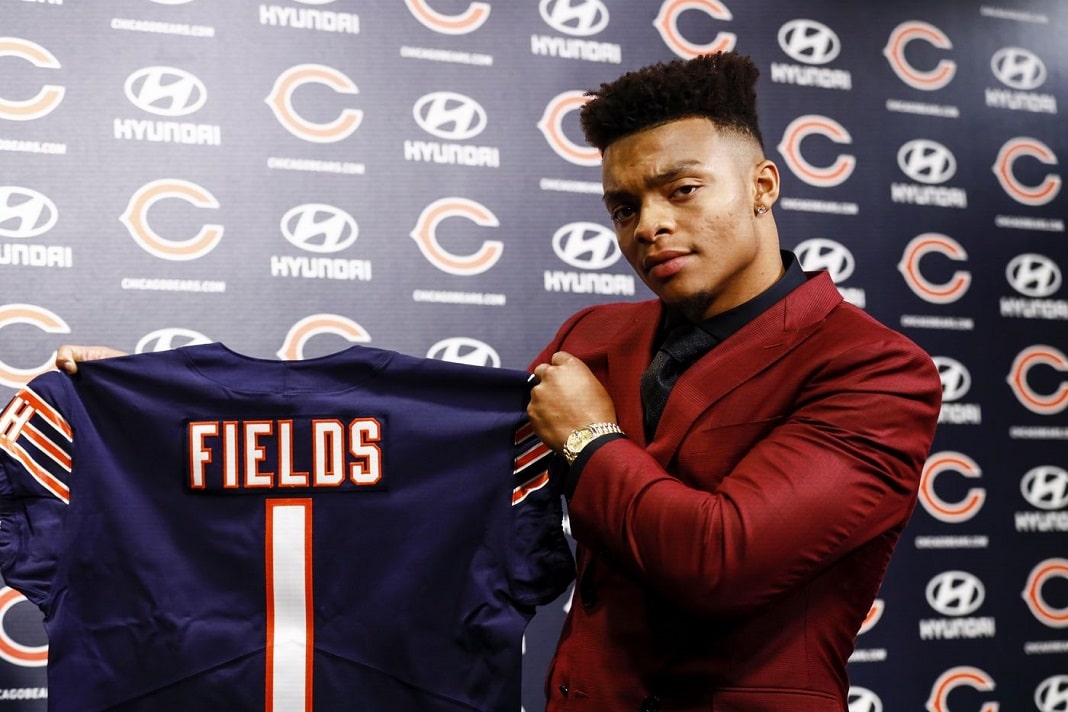 When Matt Nagy entered the 2021 offseason, it was surrounded by uncertainty. Would he managed to keep his job after a disappointing finish in 2020? George McCaskey gave the Chicago Bears head coach a reprieve, bringing him back for another year. However, Nagy knew something needed to change. The status quo for this team wasn’t working anymore. He also knew where it all came back to. The quarterback position.

After Mitch Trubisky failed to pan out and Nick Foles couldn’t bring back his old magic from Philadelphia, Nagy began thinking about alternatives. One would think the Bears head coach was all-in on finding a top veteran like Deshaun Watson or Russell Wilson. While landing either of them would’ve been incredible, Nagy also understood neither was realistic. Not that it mattered. He had somebody else in mind.

The love affair with the Ohio State standout didn’t begin a couple of months ago. Oh no. Nagy had Fields on his radar for just over a year. According to Albert Breer of the MMQB, he was first tipped off the previous March when he had a conversation with old friend Ryan Day, the Buckeyes’ head coach. Those two got to know each other years ago when they were friendly rivals as college quarterbacks, Nagy for Delaware and Day for New Hampshire. That friendship soon blossomed.

They stayed in touch through the years and bounced stuff off each other enough to build a level of mutual respect and trust. And so it was that last March, as the U.S. shut down, Nagy was in his home office looking at Day’s Ohio State prospects and decided to give his old buddy a call.

They went through all the big names you’d remember from the 2020 draft: Chase Young, Jeff Okudah, Damon Arnette, J.K. Dobbins. And after getting all those boxes checked, Nagy had one more lingering question from having watched all that tape.

“Hey, how about that quarterback of yours?” Nagy asked.

“Wow, that’s pretty powerful,” Nagy said. “What is it about him?”

That was where things started to gestate. Nagy kept those words in the back of his mind and made sure to catch Ohio State games whenever possible in 2020. The more he watched, the more convinced he became that Fields had a chance to be something special. Yet those feelings also told him that there was no way the kid was going outside the top 5 picks in the 2021 draft. That is why he kept his feelings to himself as the pre-draft process began. He didn’t want to force his opinion on others.

Then? Things got crazy.

It was becoming apparent, incredibly, that as the draft came into view last month that there was a very real possibility Fields could slip a little. At least enough to where the Bears might have an outside shot at moving up to get him. As the 1st round unfolded, things started getting crazy after the 3rd pick when San Francisco bucked convention to take Trey Lance out of North Dakota State. Each following pick became more and more nerve-racking.

It was around the #8 spot that things could’ve gone against Matt Nagy and his dreams. The Carolina Panthers were felt to be a prime spot for teams to trade up since many felt the Denver Broncos at #9 were a considerable threat to take a quarterback. After a time, nothing happened. Carolina made their pick. South Carolina cornerback Jaycee Horn. Denver was up next. This was the decisive moment.

After fielding multiple trade offers and weighing his options, Paton elected to stay put. His choice? Alabama cornerback Patrick Surtain II. Another bullet dodged. Fields was still there. The Bears knew they had to move soon. After Philadelphia moved up to #10 in a trade with Dallas for Alabama receiver DeVonta Smith, Chicago finally found a taker. Sending their 5th rounder in 2021 along with future 1st and 4th rounder to the New York Giants, the Bears jumped up to #11 overall.

After 13 months of scheming, Nagy got his guy. Fields became easily the most talented QB Chicago had ever drafted. Now the real work would begin. It was up to him and the coaching staff to transform the young quarterback into what he should be. A superstar.