Martellus Bennett is well-acquainted with the Green Bay Packers organization. He played against them twice a year when he was a member of the Chicago Bears. Then in 2017, he signed a three-year contract with the team to become their new tight end. Amazingly, just nine months later he was waived by them. The reason given at the time was a failure to disclose a medical condition designation. It felt odd to say the least. Almost like something else was going on.

Four years later, fully retired and feeling feisty, Bennett decided to open the flood gates. Everybody has seen the news recently about the NFL having a massive cache of emails surrounding the Washington Football Team organization. One that has been slapped with multiple lawsuits for its ugly culture. Some of those emails belonged to Jon Gruden, former head coach of the Las Vegas Raiders. They included lots of offensive racist, homophobic, and misogynistic language. The backlash forced him to resign.

A lot of people aren’t buying that this is the only dirty laundry the emails revealed. Not when there are well over 600,000 of them. There has to be more that the NFL doesn’t want people to see. Congress has already started to apply pressure for the league to release the emails. One person who is more than a little interested to see their contents too is Bennett. He believes they will reveal just how ugly things got with the Packers behind closed doors. The former tight end explained during a lengthy and jaw-dropping Twitter thread.

I would love to see the packers organizations emails and communications pertaining to my situation on that team.

Packers fans were sending hate mail and leaving death threats and other hateful messages on the team voicemail because I was protesting. It got so bad that Doug Collins the head of team security was worried something might happen to me in Wisconsin. 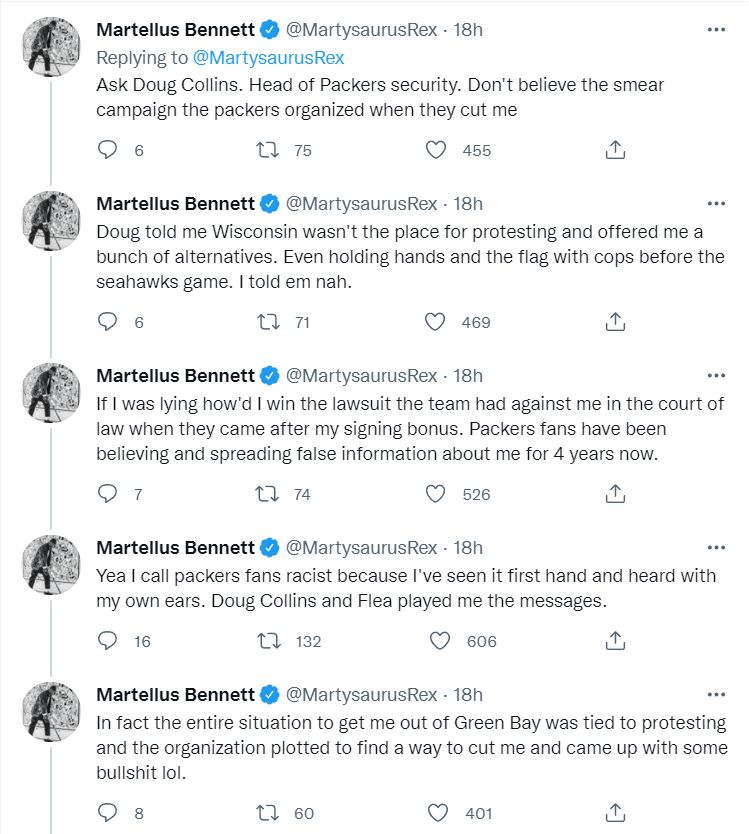 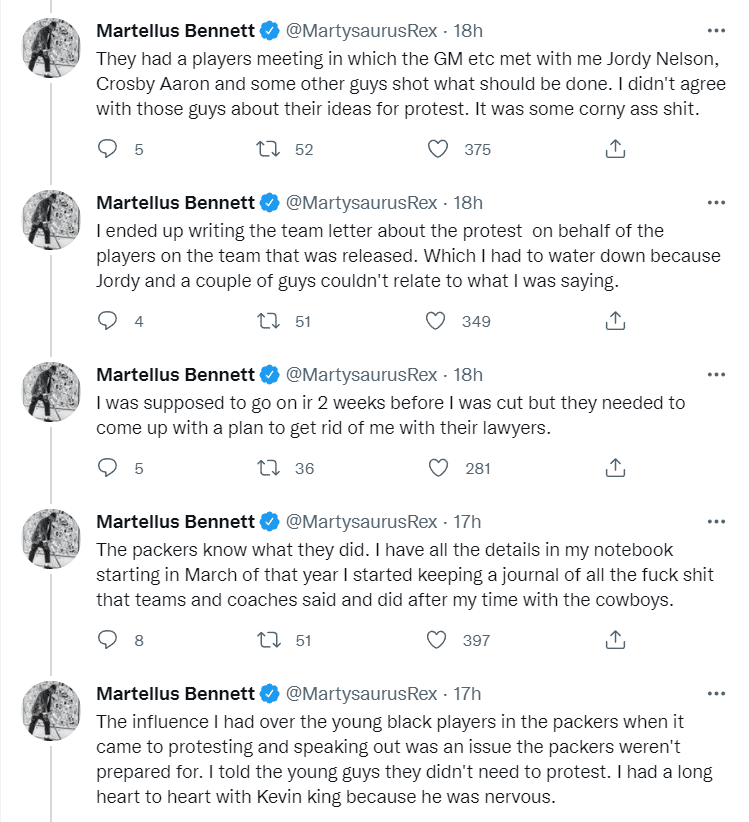 So to recap. Bennett calls Packers fans racist. Called the organization crooked and gutless. They did everything they could to stop him from protesting. Remember this was at the height of the Colin Kaepernick controversy. The last thing they wanted was a strong personality like him stirring the pot. So based on what he’s saying, they used an injury he’d suffered as a loophole to eventually cut him loose. When they tried to get some of the money back from his contract, he seemed to have enough dirt on them to win the case.

That is the reputation of not just him but his entire family. They aren’t afraid to share their opinions, not caring who it upsets. He called out the Bears for being trash and leaderless. He called Jimmy Garoppolo a “bitch” due to a supposed lack of toughness in New England and San Francisco. Now he’s shifted his spotlight to the Packers. Say this for the man. He doesn’t seem to have any bias about who he targets.

It is also nice to see that no matter how hard they try, Green Bay can’t seem to preserve their squeaky clean image. They’re the same as every other NFL franchise. Well-meaning for the most part but also having a shady underbelly on the business side of things. Martellus Bennett was a sacrificial lamb in order to preserve team cohesion.

It didn’t help much.

The Packers finished 7-9 that year and missed the playoffs. The next season they went 6-10 and were forced to reset. Bennett landed in New England and returned to the Super Bowl. He retired shortly after. Now he seems to be preparing a crusade of revenge against all those who wronged him.