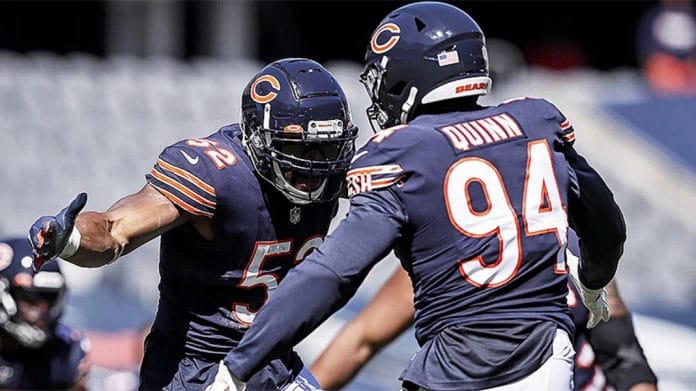 Nobody saw this coming. Not after what happened in 2020. That season, Khalil Mack and Robert Quinn combined for just 11 sacks. So far in 2021? They have 11.5 sacks. In six games. They are dominating every single week and it’s been a treat to watch. Can this trend hold up? If it does, then Chicago Bears fans might end up seeing something that has almost never happened in franchise history.

Since sacks became an official statistic in 1982, the Bears have had a pair of edge rushers top 10 sacks in a season at the same time just once. That came in 1990 when Richard Dent (12) and Trace Armstrong (10) managed to pull off the feat. Chicago finished with the 6th-ranked defense that year and made the playoffs. There have been close calls before and since then but none have been able to duplicate it.

That could change over the next two and a half months.

Mack has six sacks. He needs four over the remain 11 games in order to crack the double-digit mark. Quinn needs 4.5. It would be easy to say this is a lock given how they’ve played thus far. However, everybody knows these things can dry up fast. Injuries can also happen. Mack has already been playing at less than 100%. Quinn has a history of health issues too. So they need plenty to bounce their way in order for this to happen.

That said, it doesn’t look like they’re slowing down. Defensive coordinator Sean Desai continues to put them in advantageous positions to get home. Even pairing them together on the same side of the line of scrimmage. Every button he’s pressed up to this point has worked. If the secondary can provide even modest coverage, they should continue to feast.

We talked about the CHI pass rush on the Week 6 @NFLMatchup show.

Khalil Mack and Robert Quinn are fulfilling a vision

This is exactly what GM Ryan Pace had in mind when he signed Quinn to a big five-year contract last season. The chance to pair two dynamite pass rushers together was something the Bears had searched for going back several years. They tried to get it done with Leonard Floyd but he never quite took off in Chicago. Quinn had 11.5 sacks in 2019. He seemed like the perfect wingman.

Then he delivered just two sacks last year. Bears fans were furious. All that money for even fewer sacks than Floyd had the year before? They called for Pace’s head on a stick. Information trickled out later that Quinn was dealing with a condition called drop foot. It impacted the nerves, making it difficult to get any sort of push from the foot as a result. Something that is pretty important for a pass rusher. The veteran never complained about it, but he was never quite right. As a result, Khalil Mack took on lots of extra blockers.

Opponents can’t do that anymore.