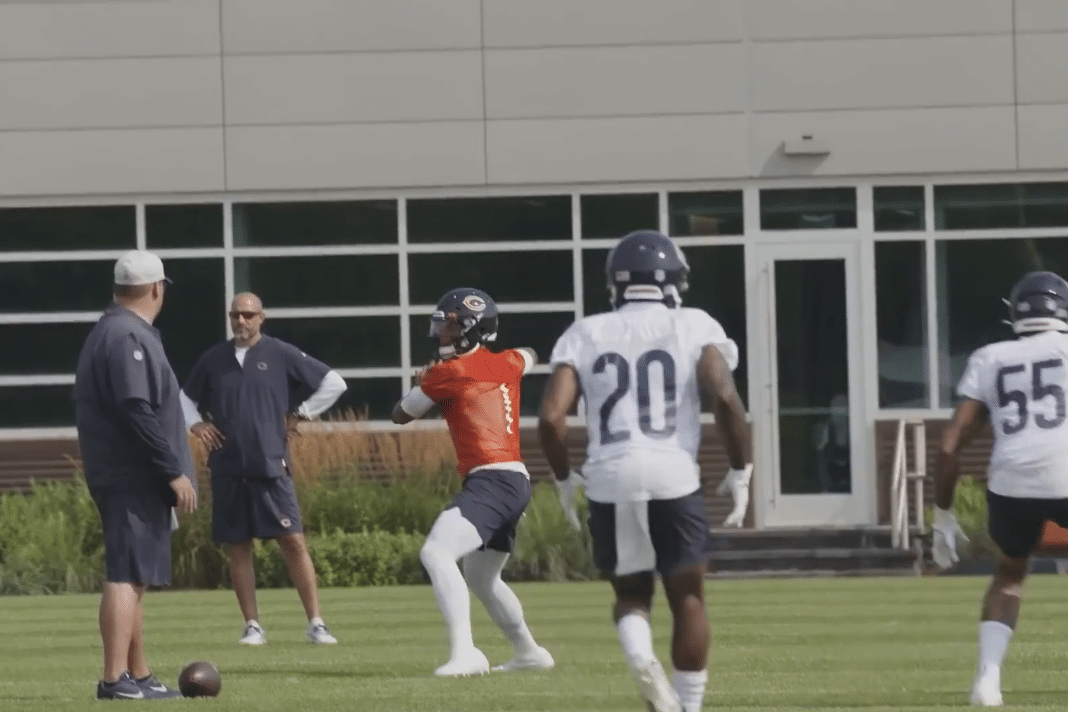 The Chicago Bears have mismanaged their quarterbacks for a long time. In every way imaginable. Sometimes by having a poor supporting cast around them. Sometimes by having an inadequate coaching staff in charge. Then there were times they may have thrown a guy onto the field before he was ready. So one can understand why the team wants to make sure they get this right with Justin Fields.

Not only because a lot of jobs are riding on his success, but also the fact he’s such an immense talent with superstar potential. They have to do this the right way. That is why head coach Matt Nagy has remained steadfast in his original plan. Start Andy Dalton for now and let Fields learn from the safety of the sidelines. When he’s ready, he will play.

Dalton has looked sharp and composed through the first week of training camp. Not surprising for a veteran entering his 10th year. Fields? He had some consistency issues but did manage a few flash plays every day. People were waiting to see if he’d start to turn up the dial more. Start to show that ability that made him the 11th overall pick. The moment finally came on the August 2nd practice where from multiple accounts the rookie went off.

Fields with a nice deep ball down the right sideline but dropped by Ives. Prior to that, Fields missed Goodwin on a throw deep. #Bears

After breaking the huddle, Fields noticed newcomer Jesse James going the wrong way and immediately corrected him to get him on the other side of the formation. Nice awareness displayed by the rookie.

Holy SMOKES! Fields with a “Mahomes” sidearm throw running to his left and fit the ball into tight coverage for the completion to Jesse James. 😳

Justin Fields with two good passes in a row over the middle of the field. Fields hit Riley Ridley first and followed that up with a nice pass to J.P. Holtz.

Fields just converted on 3rd and 14 to keep the drive alive. Wims on the reception.

Fields now converts on 3rd and 12. This time with his legs. 👀

Our first TD of the day is a 39-yarder from Fields to Wims. Looked like a broken coverage, and the rookie took advantage.

While the Bears still refuse to provide video, this offers a glimpse of what can make Fields so special. He’s such a natural athlete. On one play he’ll strike with a missile over the middle for a big gain. Then on the next, it’s a scramble using that 4.45 speed for a 1st down. Finally, after being run ragged during a long drive, he’ll rip your heart out with a deep ball for a touchdown. How do you stop something like that?

This is what is supposed to happen with a young quarterback. He starts off a little slow in camp. His head is swimming with lots of new information and the speed of NFL practices. Then after getting some practice under his belt, he starts to get steadily better. The timing of this strong performance was quite perfect. The Bears will hold their first padded practice tomorrow on August 3rd. That is where the real fun begins.

How will Justin Fields respond when the defense is allowed to put actual pressure on him in live scrimmages? One thing is for sure. He isn’t afraid of what’s to come. The quarterback wants that challenge. He wants to be pushed. That is the only way he is going to get better. Fields’ goal isn’t just to be in the NFL. It is to be great. To be one of the best in the game. That is why he practically lives at Halas Hall, working out and relentlessly studying film.

Fruits of those labors are already showing up.

Given enough time, Fields should end up being a success. Presuming Nagy and GM Ryan Pace don’t find a way to somehow screw it up. This is why both of them are considered on the hot seat. They already failed to elevate one top quarterback prospect. If signs show up they aren’t doing right by another? They likely could be gone by next offseason.