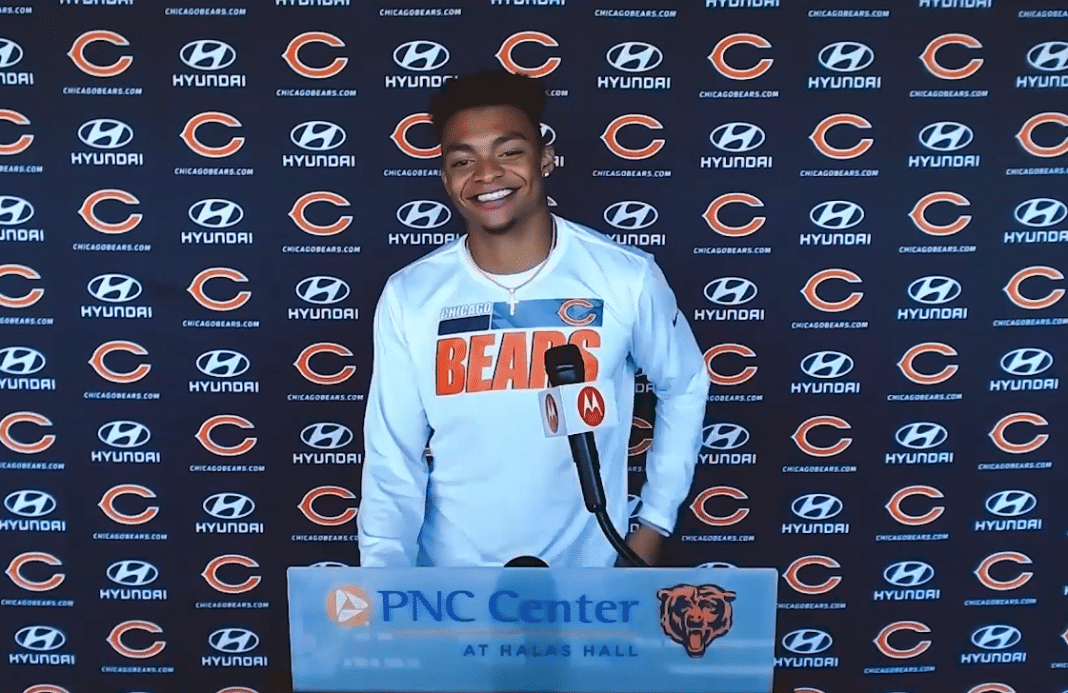 Talent by itself is important for an NFL quarterback. If you can’t make the difficult throws in this league, you aren’t going to last long. That said, so much more goes into playing the position at a high level than how far you can throw the ball or how fast you can run. It takes a high degree of intelligence and also something else that is criminally overlooked. Lots and lots of self-confidence. Justin Fields understands this.

Look at guys like Tom Brady, Aaron Rodgers, and Patrick Mahomes? All of them are immensely gifted. Yet what sets them apart is how incredibly sure of themselves they are. Some might call it arrogance but it isn’t arrogance if you can back it up. Something they do every single week. Fields is much the same. Don’t be fooled by his somewhat stoic exterior. The guy has an internal drive that is insatiable. Combined with his relentless work ethic? He has taken on a subtle swagger about himself.

Something that was evident yet again during his most recent interview.

It is one thing for a young quarterback to say he has to make sure such mistakes don’t happen again. It is another thing for him to say they aren’t going to happen again. This isn’t about hope. It’s merely a fact. Once Fields has a grasp of what he was supposed to do in a given situation, don’t expect him to misread it a second time.

This is the sort of swagger the Bears haven’t really had at the quarterback position. Since Jay Cutler left. The key difference this time around is Fields isn’t nearly as mistake-prone as Cutler was. Where the former QB didn’t seem to mind the blunders too much, the rookie almost takes them personal. He doesn’t like making them. A natural reaction to somebody who is kind of a perfectionist.

Justin Fields has the right mindset for what is ahead

He isn’t going to make waves in regards to his spot on the depth chart. Head coach Matt Nagy has a plan for him. One the Bears staff feels is in the best interests of his development. That involves sitting on the bench and learning behind a consummate veteran in Andy Dalton. If it was good enough for Joe Montana, Aaron Rodgers, and Patrick Mahomes? It’ll be good enough for him.

To his credit, Fields isn’t perturbed by things. He and Dalton are already becoming tight, attending dinners together. The 33-year old has taken the rookie under his wing. Justin Fields is being exactly what he should be. A sponge for all the information he can possibly wring out of Dalton and fellow vet Nick Foles. They’ve seen everything the NFL has to offer. Taking their advice will only make his transition that much smoother.

His time will come.

That much is inevitable. Nagy just doesn’t want to throw him out there before he’s ready. Until then, Fields’ job is to continue stacking good practices together. Once everybody is certain he’ll be able to handle the challenge of Sundays, then things will truly begin.