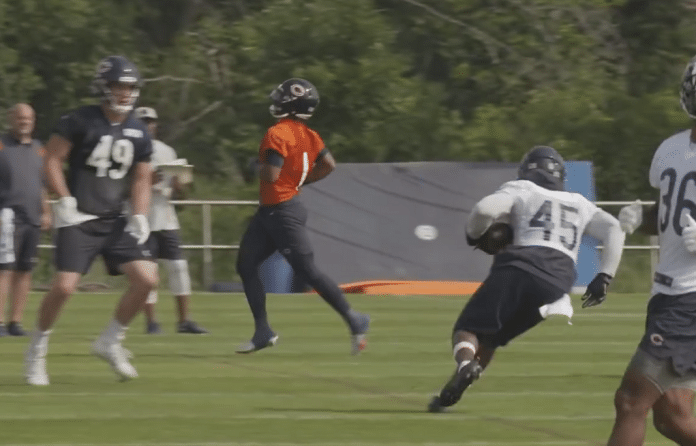 Here is the thing to remember about training camp. Not every day will be perfect. Even the best players can have down moments from time to time. This is especially true for rookies. Justin Fields is no exception. As talented as he is, there is still so much for him to learn. The Chicago Bears defense reminded him on Thursday when they handed the QB one of his worst practice showings of camp. While he still had some of his trademark flashes, he also had a number of interceptions and other passes that should’ve been intercepted.

Most rookies would’ve just shaken their heads and gone to the locker room wondering what went wrong. Here is the thing though. Fields isn’t most rookies. One thing that has stood out constantly about the 11th overall pick is his perfectionism. The guy is a workaholic. When he senses a weakness in his game, he is going to attack it with unrelenting energy. That element of obsession in his personality is what drew the Bears to him.

That’s it for practice. It was a lighter one but not a good day for Justin Fields. Had 2 INT and his WRs had about 4 or so drops. Andy Dalton was solid but nothing that really jumped out to me. #Bears

I’ll add this too. Probably could have had another INT. Johnson broke on a route and got his hands on a pass too.

His response to the poor practice was predictable in that regard.

According to Patrick Finley of the Chicago Sun-Times, the rookie pulled quarterbacks coach John DeFilippo aside after practice ended. Rather than express frustration or stating he’ll do better next time, Fields had a simple request.

Frustrated by the way he played earlier in the day, Bears rookie quarterback Justin Fields had a request for his position coach Thursday. After practice was done, he asked quarterbacks coach John DeFilippo to walk him through the practice script — what plays the team ran — a second time.

“It’s just really refreshing to see a young guy as willing as he — that’s had the amount of success he’s had in his past — [and] he wants to be great … ” DeFilippo said Thursday afternoon. “Little things like that, that, I don’t wanna say wow you, because I know the player. I’ve gotten to know him over time. It doesn’t shock me that he wants to do that.”

This is a nice snippet of the player the Bears have at quarterback. It is one thing for Fields to be as talented as he is. Most his age would be content leaning on their pure physical ability. They don’t learn to embrace the mental discipline required of an NFL quarterback until a couple of years into their careers. Not Fields. To him, hard work is the same as breathing. He knew the Bears defense showed him how far he still has to go before he’s ready. So not a moment will be wasted working to get there.

Justin Fields will face his next big test on Saturday

The Bears will host the Buffalo Bills at Soldier Field for Week 2 of the preseason. After a brief injury scare, it appears the rookie QB is still slated to play in that game. No doubt plenty of fans are anxious to see him go toe-to-toe with Mitch Trubisky who will be starting the game. They may have to wait though. Expectations are Andy Dalton will start at least one and a half quarters. Perhaps the entire first half depending on how it goes.

Dalton has motivations of his own going into this game. His preseason opener was rather quiet. He has reportedly practiced well this week but knows he has to start making some things happen in live action. If he delivers another dud while Justin Fields again flashes his like he did last week. Then the conversations about the rookie actually starting Week 1 will be impossible to drown out.

Something Matt Nagy is desperate to avoid.

Thursday was a reminder that Fields hasn’t arrived yet. Not even close. He still has plenty to work on. It is just encouraging to see that he isn’t taking anything for granted. The young quarterback wants to be great and is willing to do whatever is necessary. If that means putting in extra hours? So be it.