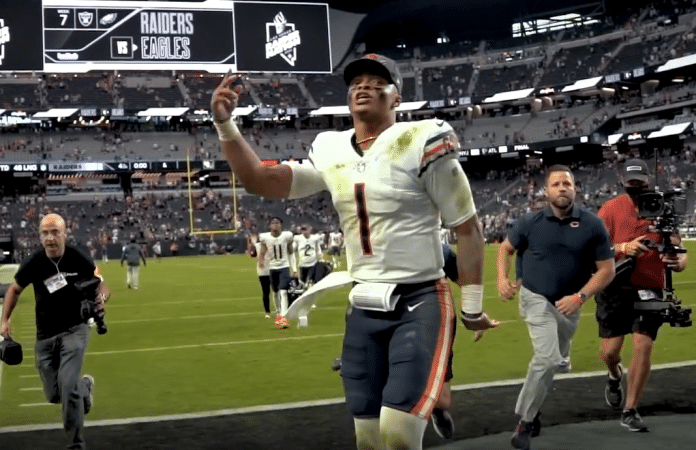 Justin Fields had to know it was coming. No shadow looms larger over the NFC North than Aaron Rodgers. He has owned this division for over a decade now and has owned the Chicago Bears more than any team he’s played against. People can count the number of times this team has beaten him on one hand. A big reason for why that is? The inability of Bears quarterbacks to challenge him on the scoreboard.

The truth is Green Bay has had the number of Bears QBs for a long time. Stats don’t lie in this regard. It’s pretty ugly.

Not a great run. Fields will be the latest challenger to Rodgers’ crown. Their first meeting is this Sunday and the hype is building fast. The winner of this game will have control of the division. Green Bay is 4-1. Chicago is 3-2. A win for the Bears would put them at 2-0 in the NFC North with an early tiebreaker over their rivals. To pull this off, they will need a good performance from Fields. Can he match Rodgers?

The rookie was asked about this during his weekly press conference. He admitted he has great respect for the future Hall of Famer. There are many things he does that Fields hopes to emulate in his own game. However, when it comes to comparisons? There is zero interest. Fields is focused on one thing and one thing only.

Justin Fields said he won't be worried about matching up with Aaron Rodgers as the Bears and Packers face off: "My job is to win. … As long as we win, I'm doing my job the right way."

Justin Fields on going head-to-head with Aaron Rodgers: "I don't look at it as a matchup between me and Aaron… I'm not worried about comparisons between touchdowns, stats. I'm just worried about winning that's it." #Bears @cbschicago

As always Justin Fields has his priorities straight

Would it be great if he went out and put up big numbers? Sure. Bears fans would lose their minds. That isn’t his job though. Fields’ first duty is making sure he makes the right decisions to ensure his team wins the game. Something they haven’t done nearly enough of against this opponent. Head coach Matt Nagy is 1-5 in his coaching career against the Packers. If anybody needs this game, it’s him.

The great thing about Justin Fields is his lack of selfishness. He has embraced his role in the Bears offense. It isn’t one of slinging the ball everywhere like other rookies are doing. His job is to feed the running game, making good throws off play action, and protect the football. He did this to perfection in Las Vegas and the team pulled off a huge win. The rookie had just 111 passing yards and a touchdown.

Would he do that again if it meant beating the Packers?

His answer above says it all. Whatever it takes. The numbers don’t matter. Everything is about winning. He isn’t here to please the masses with fancy stat lines. The Bears are paying him a lot of money to win football games. By making that clear, it will trickle down to everybody in the locker room. This isn’t about Fields vs. Rodgers. It’s about Bears vs. Packers and should be treated no other way.