One of the most unsettled units going into training camp for the Chicago Bears is the offensive line. People never want to hear this, especially with a young quarterback like Justin Fields getting ready to enter a pivotal second year. Only two of the five spots can be considered locked down, with Cody Whitehair at left guard and Lucas Patrick at center. The remaining three are educated guesses at this point.

With the personnel on the roster, it isn’t difficult to guess what the tackle situation will end up being. Fellow second-year players Larry Borom and Teven Jenkins figure to fill those spots. Current projections have Jenkins at right tackle and Borom at left. There could be a switch during camp, but that is the configuration as it stands now. The biggest concern is right guard. With James Daniels gone, the Bears have no definitive starter in mind. Only an assortment of possibilities. Gregg Rosenthal of NFL.com made his prediction for who will ultimately claim that spot.

If he’s right, the Bears are in heaps of trouble. 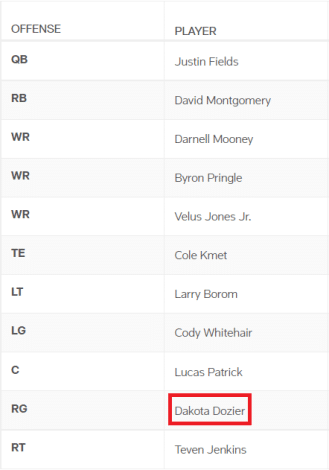 Twitter has taken this video down multiple times, but I will not be perturbed. The world needs to know of Dakota Dozier's greatness. pic.twitter.com/XPdl7f9ZBA

Now that Dakota Dozier is off the Vikings for good, I’m just reminiscing about the time he helped sack his own QB..

The Chicago Bears signed Dakota Dozier back in March after his recent three-year run with the Minnesota Vikings. On the surface, it isn’t shocking this happened. They needed blockers with experience playing in a wide zone offense. Dozier did that for two years under Gary Kubiak and then his son Klint. The problem is having experience in a particular system doesn’t automatically mean a player is any good at executing it.

Dozier has logged 1,068 pass blocking snaps in his NFL career. Across that span, he has allowed a whopping 75 pressures and nine sacks. For context, Quenton Nelson played more snaps between 2020 and 2021 and still only allowed 30 pressures and two sacks. So yeah. Dozier isn’t good. Yet many seem to think he’s their best option at right guard. That is a terrifying thought.

The good news is it may not come to that. The Bears seem high on their new influx of rookie prospects, including draft picks like Zachary Thomas and Ja’Tyre Carter. Both are viewed as college tackles that would make solid NFL guards. If one stands out in camp, it wouldn’t be hard to imagine them getting the nod to start. That would be preferable to going down a path everybody already knows leads to failure.

The Chicago Bears likely won't be competing for the Super Bowl this year. It should be a rebuilding season...

During his four-year stint with the Chicago Bears, Matt Nagy only had one losing season. It was far from...

There is a certain hierarchy around the NFL regarding quarterback-wide receiver combinations worth respecting. Matthew Stafford to Cooper Kupp,...

Brian Urlacher never had what could be described as a buddy-buddy relationship with Jay Cutler. They were teammates and...

Max Scharping Has Trade Buzz. Why The Bears Should Be Interested

The Chicago Bears have an issue with their offensive line. With training camp three weeks away, they only have...

Training camp is still almost a month away for the Chicago Bears. This is the time of year when...