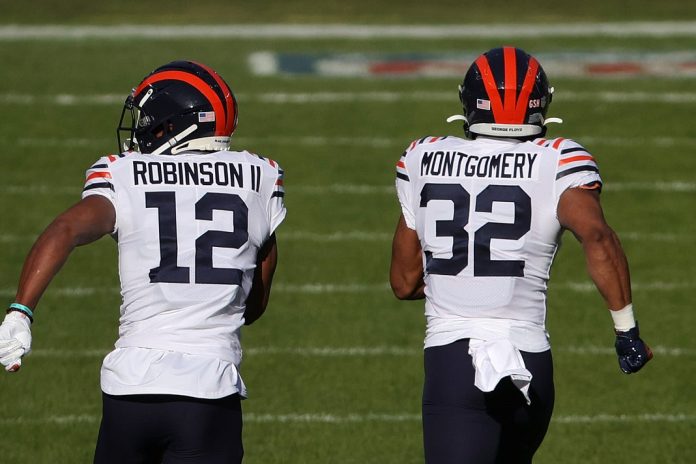 Tom Thayer is a color analyst for the Chicago Bears. He played for the team through most of the 1980s and has announced games for them going back years. He is as loyal and dedicated to the organization as anybody in the business. So when somebody like him says it might be time to start thinking about the future? It is hard not to take notice. Yet that is exactly what happened.

During an appearance on Mully & Haugh for 670 The Score, Thayer talked about the frustrating loss to the San Francisco 49ers last Sunday. How the defense wasted the best game Justin Fields has played yet in his young career. Too much about that defeat offered warning signs that this roster is trending in the wrong direction. That is why when asked about the upcoming trade deadline, the man wasn’t at all perturbed about the idea of shipping out some key veterans. Starting with a certain wide receiver.

“There’s a few guys I have in mind that I’d be willing to trade. I would have to consider A-Rob just to see if there’s a team out there that would consider his services that was going to give me some value for him.”

Robinson is off to the worst start of any season in his career. His chemistry with Fields just isn’t there. It is clearer than ever this is his last season in Chicago. Has he checked out? That might be somewhat unfair but it’s hard not to feel like he is resigned to his fate at this point. It is in the Bears’ best interests long term to see if they can get something for him. In fact, Thayer took it a step further.

“You know the only guy that I would consider untouchable to me is Justin.”

It sounds crazy but that is the nature of this situation. The man understands. Chicago has the second-oldest roster in the NFL. It is in desperate need of retooling. To pull that off, they need money and they need draft picks. Right now they don’t have enough of either. Just five picks in 2022 and six in 2023. They need more. Selling off veterans who won’t be part of their future is the logical thing to do.

Tom Thayer is correct but will the Bears follow his advice?

The NFL trade deadline is rarely active beyond low-level deals. In his history, GM Ryan Pace has only made one deal at this time of year, a cheap acquisition of wide receiver Dontrelle Inman from San Diego back in 2017. Other than that? Nothing. It would be quite a departure for this regime to suddenly sell off notable players. Especially when one has to factor in that Pace and head coach Matt Nagy might be on the hot seat.

It doesn’t make what Tom Thayer says any less true. Whether Pace and Nagy like it or not, this team is not competing for a Super Bowl this year. They’ve been blown out by every contender they’ve faced this season and just got the same treatment from a 49ers team with a losing record. There isn’t anything else to see. They need to swallow their pride and do what is best for the long-term health of the organization.

Either that or get ready to step aside for somebody who will.

What makes this so frustrating is there is no clear idea if the Bears will take this approach because it would signal surrender on the season. One that Pace and Nagy can’t really afford to lose because their jobs might be on the line. They could resist doing the logical thing out of pure desperation to hang onto their jobs. A scenario George McCaskey could’ve avoided had he ripped the bandaid off when he had the chance last January.