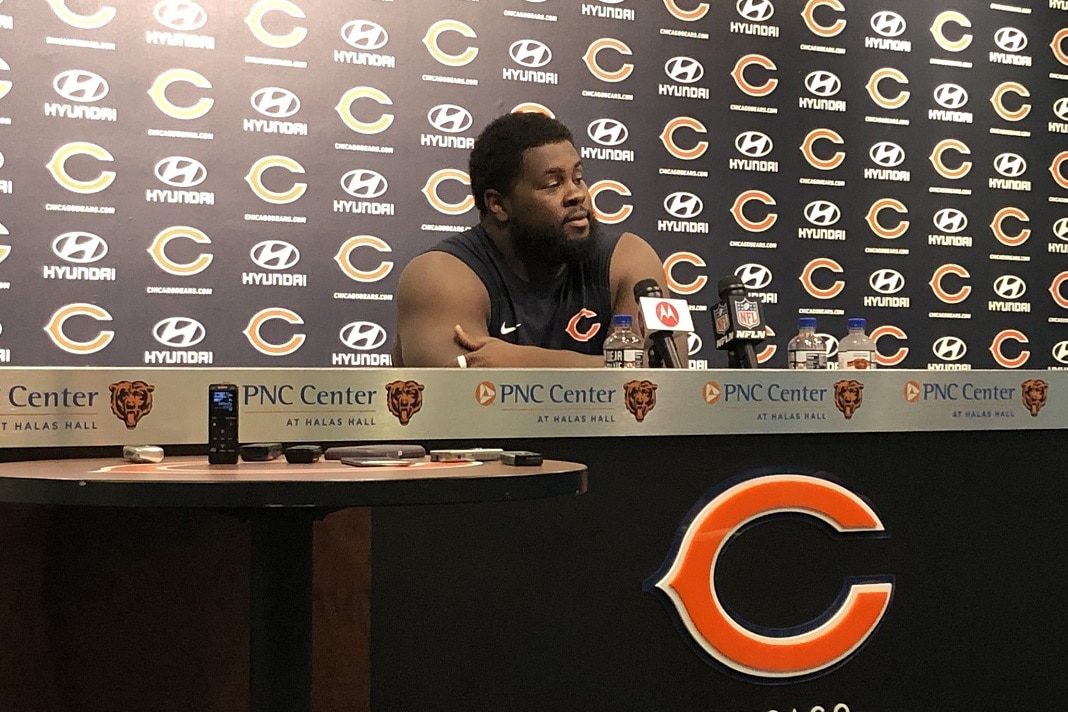 Eddie Goldman was a vital part of the Chicago Bears defense since he arrived in 2015. The focal point at stopping the run. Many people outside the city never truly grasped how important he was to the entire machine. That is why when he opted out in 2020, it proved to be a considerable blow. The Bears sank to 16th in the NFL against the run. All year there was an undercurrent in the locker room that he was missed.

As it turns out, Goldman himself has some regrets about that decision as well. There is no question he felt it was the right thing to do. COVID-19 posed a major health risk and still does. The 27-year old has a history of health issues that made him more susceptible. Not to mention some family concerns as well. However, after watching the Bears successfully navigate the season without any major outbreaks? It seems he wishes he could go back and change things.

At least a little bit.

Eddie Goldman admits there was some regret about sitting out last season, especially as he watched his team make the playoffs. He clearly missed the game. Says he knew he was coming back in 2021 as soon as last season was over. #Bears

Eddie Goldman said he opted out of the 2020 season due to Covid-19 and family issues: “It really took a toll on me. … Being away from it, it kind of killed me.” pic.twitter.com/XPm8uCPsz5

Unfortunately, the rules of the opt out clause set forth by the NFL meant once the decision was made? There was no going back. Once he was out, he was out for the year. So he had to watch the Bears play out the season while he had no avenue to return. It is little wonder he made up his mind right away that he would be back in 2021. That begs the question though.

Why did Goldman not show up for OTAs or mandatory minicamps? The same reasons he cited for his opt-out decision last year. Concerns over COVID-19 the risk it posed to his family. He wasn’t going to enter the situation until absolutely necessary. That being the start of training camp. Even head coach Matt Nagy admitted that he had no idea if the nose tackle would show up until right before it happened.

None more so than Roquan Smith. The star Bears linebacker couldn’t contain his grin when asked about Goldman on Tuesday, saying he looked pretty good. Pictures backed that up too. The big man did indeed look like he was in shape and ready to go. All of this was a relief to Goldman himself. He was nervous about how he’d be received in the locker room after his decision to opt out.

It seems that hurdle is now cleared. Eddie Goldman is officially back. What does this mean for the defense? Potentially big things. His body should be fresh after over a year off to rest and recover from any nagging injuries. Having him back in the middle should see more double teams committed to handling him. That in turn will free up Akiem Hicks and Bilal Nichols to do what they do best.

Get after the quarterback.

An improved interior pass rush should then in turn make life easier for Khalil Mack and Robert Quinn on the edges. That is the sort of ripple effect Goldman can have on this defense. A reminder of how important that nose tackle position can be to this system. Last year was last year. Hopefully, he’ll make up for the time he missed.