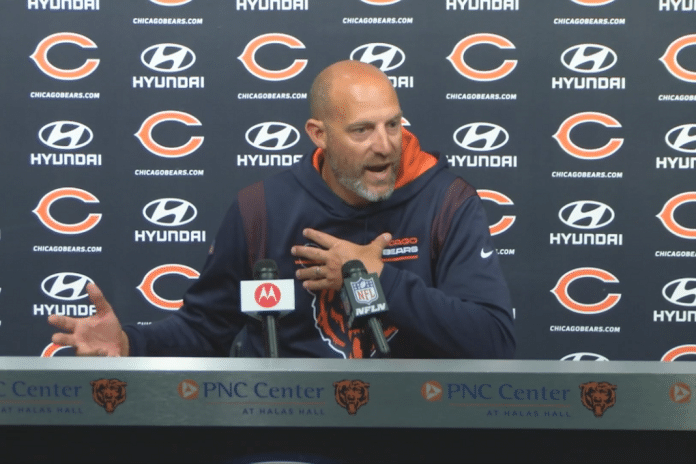 Matt Nagy talked up his plan for Justin Fields ever since the Chicago Bears drafted him. It was simple at its core. Andy Dalton would be the starter. Fields would be the backup. The rookie would get the chance to learn from a capable veteran and eventually be handed the job when considered “ready.” In essence, it was a direct copy of what the Kansas City Chiefs did with Patrick Mahomes back in 2017. A process Nagy was part of as their offensive coordinator.

Sensible enough. However, there were criticisms regarding his overall approach. Among the biggest was Nagy’s decision to not give Fields more extensive practice reps with the #1 offense during training camp. This felt like a mistake. Not only did it rob the rookie of a chance to show the team he might be able to start right away, but it also hamstrung him from having establishing connections with the starters in the event that Dalton somehow got hurt.

An event that of course happened last week against Cincinnati.

Sure enough, it was clear right away when Fields went in that there were issues. The offensive line struggling to handle his cadence. Receivers not quite being in sync with him on routes. All things that might’ve been avoided if Nagy hadn’t been so rigid in his approach during training camp. So one can imagine how people felt when the head coach casually dropped this quote during his latest press conference.

There is no getting around it. Nagy just admitted in a roundabout way that he probably should’ve given Fields more reps with the first team sooner. Maybe he and everybody else would’ve learned the kid can do all the things being asked of him. It was just a matter of getting the best possible talent around him. One can understand people being more than a little irate about it.

Despite being a former quarterback himself and a protege of Andy Reid, the man’s handling of this offense has come into question for years. This entire process with Fields over the past few months is further evidence. Nagy was so fixated on the idea of following the Mahomes approach that he didn’t bother to consider the possibility the rookie could start sooner or might need more time with the 1s in case Dalton got hurt.

It is things like this that have people losing faith. Matt Nagy is a good leader with the best of intentions. He just may not be equipped to handle the job being asked of him. Everything about him seems off. The unwillingness to adjust the system to better fit his players. Now failing to understand the basic benefits of giving his prized young quarterback a chance to work with guys he would eventually be expected to win actual games with.

Not a great look.

Now here the Bears are. Going into a tough road game against the Cleveland Browns with Fields at the helm. This marks his first full week working with the starters and Nagy is surprised at how much better he’s looked. Maybe now some people are starting to understand why many fans want him gone.