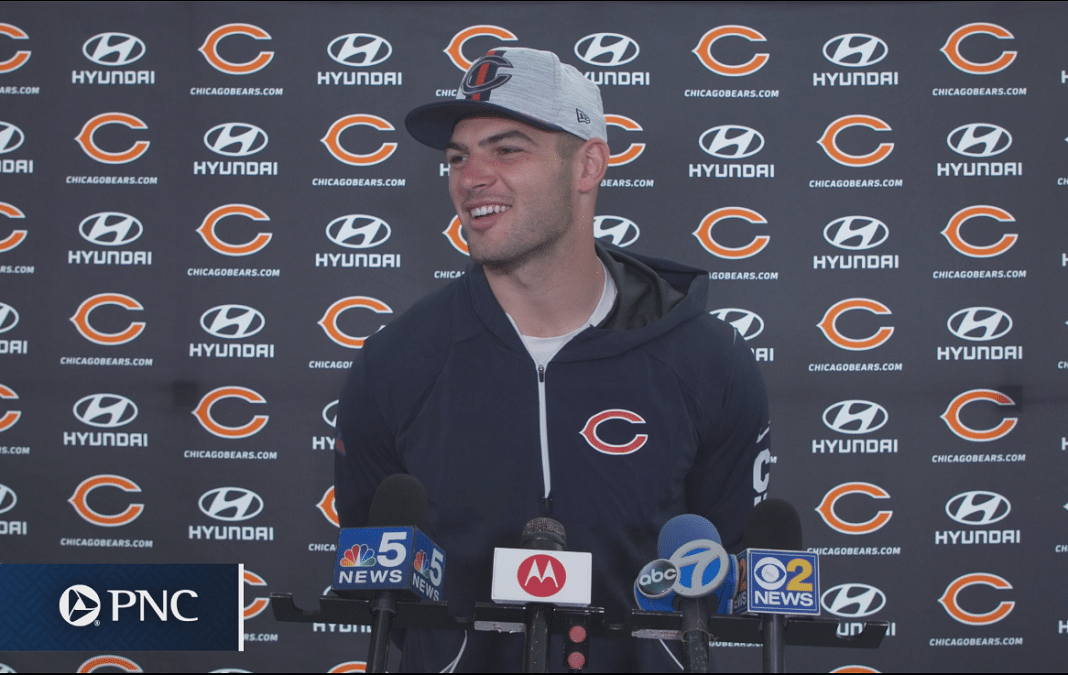 As is often the case in the NFL, the best-laid plans don’t last long. Matt Nagy wanted to give Justin Fields more time by going with Andy Dalton as the starter. That lasted less than two games. Dalton suffered a bone bruise in his knee. An injury that will likely knock him out for a few weeks. That means Fields is the official starter going into Week 3 against the Cleveland Browns. A number of teammates have already voiced their excitement to see what the rookie can do. Cole Kmet joined that chorus.

The young tight end has enjoyed a front-row seat for Fields’ development over the past several months. While the two never got to work together much in practice, it didn’t take long for Kmet to realize the rookie quarterback had some truly impressive traits. He even remembers when they first began to manifest. That was during joint practices against the Miami Dolphins prior to the preseason opener.

Fields carried that success into the game as well.

Something a lot of Bears quarterbacks proved unable to do in the past. So what exactly is it that sets him apart? Obviously, there’s the talent. Fields is big, strong, fast, and boasts an impressive arm. Yet none of those things are what stood out the most to Kmet. Instead, it was something that other veterans on the team noticed almost right away. Something that good QBs in the NFL all have.

He’s not wrong. Just three plays after that interception, Fields made the pivotal play of the game when he scrambled for a first down on 3rd and 9 to help run out the clock. Kmet’s best comment though came when asked about how different playing with the rookie will be from playing with Dalton. For him, it’s a matter of realizing that he will be doing a lot more running moving forward.

Cole Kmet no doubt hopes for more attention from Fields

Thus far he and the rest of the tight end room hasn’t exactly gotten much love in the passing game through two weeks. Kmet was targeted just eight times thus far and twice in the win over Cincinnati. He is supposed to be an integral part of the passing game. That can’t happen if he isn’t more involved. The good news is his new quarterback has no qualms about throwing to tight ends.

Fields went to Jesse James early and often in the preseason. His best throw was to Jesper Horsted in the finale against the Tennessee Titans. If Cole Kmet continues to find chemistry with him in practice, the ball is going to come his way in games. This should benefit the entire Bears offense as time goes on.

Either way, it’s nice to hear even more excitement from the locker room.

The buzz is real and impossible to ignore. Fields has had a dramatic effect on both teammates and coaches. Everybody is anxious to see this thing get going. Kmet is merely the latest to voice it. Sunday in Cleveland should be a memorable event.