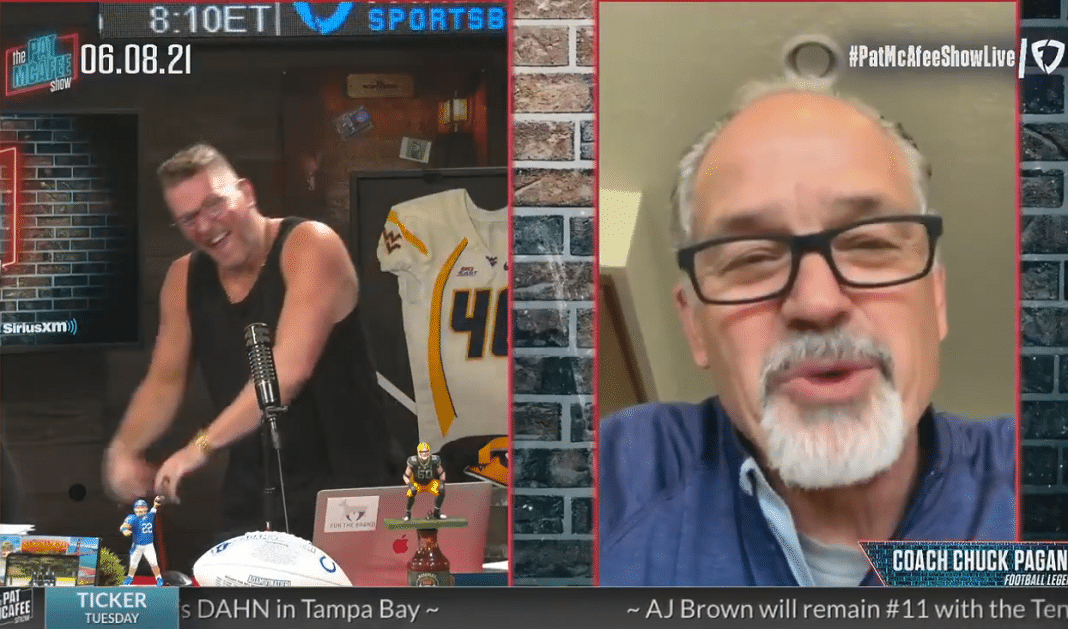 Chuck Pagano had the unenviable task of having to replace Vic Fangio in 2019. It’s never easy stepping in the shoes of a coach who’d had so much success with the Chicago Bears. All things considered, the guy didn’t do overly bad. The defense was top 5 again in points allowed that year. Then last season despite a pandemic and rash of injuries, he still managed to put together the 11th overall defense in the league.

Most Bears fans weren’t happy with his tenure, but the man deserves respect for what he accomplished under some pretty difficult circumstances. His decision to retire this offseason at age 60 was a slight surprise. Then again after such a long career and a battle with cancer? One wouldn’t fault him for wanting to take it easy. Pagano took time to appear on The Pat McAfee Show to talk about his career among other topics.

He and McAfee go back to their days in Indianapolis together.

Eventually, the conversation came around to the Aaron Rodgers situation in Green Bay. It is one Pagano can relate to in regards to Packers head coach Matt Lafleur. Handling a franchise quarterback and a growing rift with the front office. In his case Andrew Luck. When thinking about how bad things have gotten with Rodgers and the possibility he might not play in Green Bay again? He made a hilarious admission.

“You know I wouldn’t have retired if I knew he was going to do this, by the way. He’s one of the main reasons…you can tell him, he might be watching I don’t know…that I got the hell out of Chicago.”

How would Chuck Pagano handle the Aaron Rodgers situation if he was Matt LaFleur?

"I'm going to die before I let that guy walk out of my damn building" #PatMcAfeeShowLIVE pic.twitter.com/OJHBmL8FFs

It is hard to fault Chuck for that one. In four meetings with the Packers icon, Pagano went 0-4. His defense gave up an average of 26.75 points per game in those four meetings. So it isn’t difficult to understand why the coach was tired of having to go against Rodgers. Sure enough, the moment he decides to step away, the quarterback appears to be forcing his way out of Green Bay. Life just isn’t fair sometimes.

He’s hardly the first defensive coordinator Rodgers gave nightmares. That is what all-time great quarterbacks tend to do. Each of his Bears predecessors going all the way back to 2008 felt that same pain. At least he might be able to content himself knowing he was the last to feel it. Now the mantle falls to Sean Desai. Pagano’s safeties coach has elevated to the defensive coordinator job this offseason.

If anybody is counting his blessings, it would be him. He’ll be the first Bears coordinator not to face a Packers quarterback who is a slam dunk Hall of Famer in 30 years. Unless Jordan Love works out as many in Green Bay are currently praying. Based on early impressions? It might not be best to count on that. Don’t expect Bears fans to feel sympathy over that.

Quite the opposite, in fact.

They’re getting so much delight from watching Packers fans squirm, coming closer and closer to the realization that Rodgers may actually be gone. Chuck Pagano no doubt wishes he could be in at the kill for that. Coordinating the defense to at least one dominant effort against a floundering Green Bay offense. Barring that, one can imagine he’ll be cheering for exactly that when the two teams meet later this year.