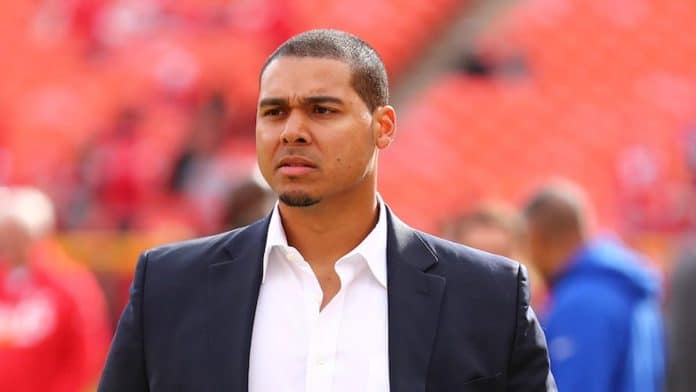 The Chicago Bears have three candidates coming back for second interviews at the GM position. Chiefs director of player personnel Ryan Poles was the first to get one. Now according to several sources, the same will happen for Titans VP of player personnel Monti Ossenfort and Patriots senior executive Eliot Wolf. All three candidates are highly experienced and work for successful organizations. Each reportedly had strong interviews that impressed George McCaskey and his search team.

However, it seems there is now a leader in the clubhouse. According to Jeff Hughes of Da Bears Blog, the same man who broke that Ryan Pace was getting fired two weeks ago, revealed that the growing belief is it will be Poles who ultimately ends up with the GM job. He blew the Bears away in his first interview and if he does well in the second, there is a strong likelihood they won’t let him leave the building.

While the Bears very much like Ossenfort and Wolf, I believe they have zeroed in on Ryan Poles and if his interview goes well tomorrow, they may not let him leave.

This is an inspiring choice.

Poles was an undrafted free agent for the Bears back in 2008 out of Boston College. It quickly became clear he wouldn’t have a future playing in the NFL. So a year later he joined the scouting ranks with the Kansas City Chiefs. Over the next decade he climbed the ladder from scout to college scouting coordinator to director of college scouting and finally director of player personnel. A testament to his value is the fact he kept doing this despite the Chiefs having three different general managers during that span.

So Ryan Poles got a good education on different ways to run a front office. What works and what doesn’t. One thing is clear. His fingerprints are all over that Kansas City roster. Since becoming their college scouting director in 2016, the team went on a remarkable run collecting elite talents.

Ryan Poles understands how to build around a young QB

He’s proven that during his time in Kansas City. What a lot of people will want to know is what he plans to do for a head coach. This is where it gets interesting. Two names currently stand out as strong possibilities. Former Dolphins head coach Brian Flores is friends with him. The two became acquainted via their Boston College roots. However, Poles is also said to be a big supporter of Cowboys defensive coordinator Dan Quinn.

Matt Eberflus is another name to keep an eye on. Albert Breer of the MMQB mentioned the two are connected via mutual friends and is somebody Bill Polian is said to be high on. So unless Ryan Poles decides to widen the search and meet more candidates, it feels like those three names are the ones to watch.

The next 24 hours could tell the story. Poles’ interview is on Tuesday. It will be in person. If he delivers the right impression, there is a strong possibility the Bears could move quickly to seal the deal.