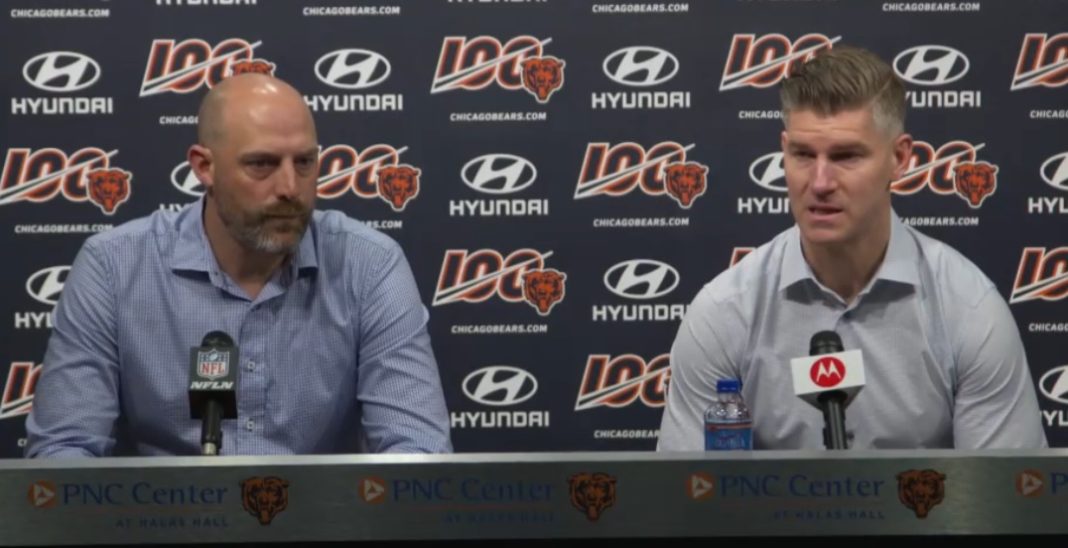 As the Super Bowl participants celebrate their conference titles in preparation for the February 7 showdown at Raymond James Stadium in Tampa, for other teams, the Senior Bowl kicks off down in Mobile, Alabama this week.

The Chicago Bears will surely pay close attention.  Quarterback prospects such as Mac Jones and Jamie Newman will have plenty of eyes on them.  Other prospects on the offensive line and wide receiver will also look to make a name for themselves.

And the Bears need help in all of those areas!

There will be plenty to discuss as the offseason trudges on, so for now, I’ll reach into this week’s Bears Mailbag.  Thanks to all who submitted questions — follow me on Twitter @DhruvKoul to continue the conversation.

Do the you believe Pace/Nagy have a win or else ultimatum for this year. And if so how do the Bears field a competitive team given the average draft capital and lack of cap space.

From an optics standpoint, the Bears really messed things up badly in their year-end press conference.  Ryan Pace and Matt Nagy likely have a win or else mandate from ownership, but the way they didn’t clarify Pace’s contract status (is it his last year?) and people don’t know if his deal lines up with Nagy’s, that’s going to be a major question mark for potential coaches and players in free agency.

The Bears have a lot of moves they need to make to get under the salary cap for 2021.  They will start with some obvious cuts (likely Buster Skrine, Jimmy Graham and Bobby Massie).  Then they may need to make some trades to acquire draft capital (looking at Kyle Fuller, Akiem Hicks and even Allen Robinson (tag-and-trade) as the main trade chips).  And THEN the Bears may need to restructure contracts again to gain salary cap space (not ideal, but it may be necessary).

The reality is, most of their resources should go toward acquiring a franchise-altering QB, especially in the short term.  A transcendent QB can cover up deficiencies in many areas.  (Unfortunately, there are only like six in the entire NFL.)

They may need to trade down in the NFL draft to acquire more picks, too.

All-in-all, it’ll be a tough project.  The Bears have a lot of holes on the roster to fill and depth to acquire.  They have to maximize their resources — but nothing, again, will matter without a QB.  They have to get that right.

Being a make or break year for Pace/Nagy, do you think George has to sign off on any trades that could set the team back for several years? I feel like desperation is gonna make Oace do some weirder than usual things at QB.

Usually, George McCaskey and Ted Phillips do not meddle in football operations.  They give the GM (Pace) complete autonomy over the football side of the house.  One can/should argue whether Phillips and McCaskey are qualified to HIRE the GM in the first place, given their non-existent football background, but that’s a different discussion.

However, certain moves are generally run up the hierarchy out of respect for the franchise (and keeping bosses informed).  The Jay Cutler trade, Khalil Mack trade, Mitch Trubisky trade, etc. all were ‘approved’ by ownership — formalities, but still.

However, with this offseason being so critical for Pace and Nagy and the direction of the Bears franchise for the next several years, they may be tempted to make a lot of “screw the future” moves to win now and save their jobs.  What good is the future if they’re not here, right?  It’s completely valid, from their perspective.

But I still think ownership will not handicap them from making moves they think benefit the Bears in the immediate future.  Unless it is something absolutely outrageous, like offering the entire set of draft picks the Bears have for the next three years for Deshaun Watson, I believe they will have free reign on making moves they decide are best.  And that is a fair approach, too.

Remember, Pace and Nagy are also going to be evaluated by 31 other franchises with how they handle this offseason.  If they play reckless and fail, their NFL futures will take a serious hit.  They have to be smart.

Who’re we getting boss

I assume you mean the QB position with this question.  And it’s a good question!  There are a lot of things to figure out this offseason for many teams, but it appears there are many teams who will be looking for QBs (but also many teams looking to move on from current starters).

The Bears should be actively involved on every QB option.  Here are some targets I think they will consider seriously.  Keep in mind, this is not a list of QBs I think they *should* pursue — I think many of these QBs won’t move the needle much (e.g. Jimmy Garoppolo).  But they are possibilities…

It's a very intriguing call. He's survived three different coaching tenures — that's unheard of for a low-level coach (at the time). He is universally respected and a smart defensive mind. He understands/runs Vic Fangio's concepts. It's worth the opportunity.

The Bears will explore both avenues. Their goal is to acquire a QB that gives them a great chance of winning in 2021 — both Pace and Nagy's jobs depend on it.

Via trade, the Bears should inquire about Matthew Stafford, Matt Ryan, and Derek Carr.

In the draft, watch Mac Jones.

They have to re-sign some players (Patterson, Santos), but special teams are OK.

Other than maybe RB, every other position either needs a starter or more depth (e.g. OL, TE, CB), and some positions need a total overhaul (e.g. QB, WR).

Lots of work to do in the offseason.

His teams struggled to make the postseason, mainly because Jameis Winston was a turnover machine. It's amazing what an elite QB like Tom Brady can do.

I'm just getting in on the "Poke the Bear(s)" game that @MarkPotash started.