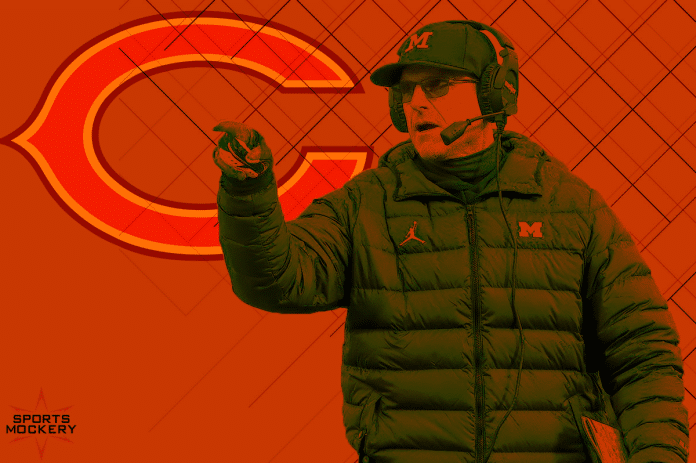 If there is one name that can be called the proverbial elephant in the room for this 2022 offseason, it’s Jim Harbaugh. His name has floated around NFL circles pretty much since he left for Michigan back in 2015. Yet nobody really felt the rumors were serious. Until now. Bruce Feldman of The Athletic made it clear that the 58-year old coach had his eyes on a jump to the pros following the best season of his career in Ann Arbor.

People weren’t sure what to make of it. Is he serious about returning to the NFL or is this just a ploy to get a new contract? Harbaugh himself hasn’t spoken in public on it since the college season ended. So people have been forced to rely on various sources. This is where things stand. The belief is Michigan is ready to offer him a new contract but the coach is waiting to see what happens with his NFL prospects. Specifically in regards to the Las Vegas Raiders job which just opened up. Adam Hoge of NBC Sports Chicago provided an interesting update on what he’s been hearing.

“There’s a lot to sort out when it comes to Harbaugh, but when you read between the lines, the situation becomes more clear. Based on a couple very strong reports and a few well-placed phone calls this week, my current read on the situation is this: Harbaugh might want the Raiders job more than the Raiders actually want him.”

This lines up with what Raiders beat reporter Vic Tafur indicated.

None of the rumors about Harbaugh and that job have actually come from Las Vegas. In fact, one of his sources even called it “total noise.” If this is true, then where does that leave the Chicago Bears? I wrote yesterday that Harbaugh is interested in the Bears job. That was never in question. What remains uncertain is how interested they are in him. Here is what Hoge had to say.

“The Bears’ level of interest in him would probably determine the level of interest reciprocated from Harbaugh’s side. My understanding is that the Bears haven’t crossed Harbaugh’s name off the list, but as they juggle a general manager search and other strong head coaching candidates — such as Bills offensive coordinator Brian Daboll (who could be available as soon as Sunday night) — there’s a limit to how long they can wait.”

It seems as if the Bears are content to take their time on the head coach front. Especially since they still haven’t hired a GM yet. Harbaugh and his camp might not like that since he can’t wait forever due to recruiting season and rumored extension he has on the table. One part of the problem might be that many of the general manager options Chicago is interviewing aren’t interested in Harbaugh as a coach.

Jim Harbaugh has three options on the table

He either must get more aggressive in his pursuit of the Bears’ job, be willing to wait until they find a GM before making his case, or cut his losses and stay put at Michigan. The longer this goes on, the more it seems like the third option will end up being the one he takes. It feels like the ball is in Chicago’s court. If they want him, all they have to do is offer the job and the odds are favorable he would take it.

The problem here is the man running the Bears search, Bill Polian. He has no real ties to Jim Harbaugh. They briefly crossed paths in 1998 when Polian took over as Indianapolis Colts GM. Then he traded the quarterback to Baltimore. That was the extent of their interaction together. So the interest in Harbaugh isn’t likely coming from him.

Part of the problem here is the Bears are going through a process of interviews. Harbaugh doesn’t seem willing to throw his hat in the ring. He should either be offered the job or not. Given his track record and elevated name in coaching circles, that is easy to understand. Unfortunately, he is dealing with an ownership in Chicago that isn’t comfortable doing something like that. Hence the wait continues.