Allen Robinson has said multiple times that he wouldn’t mind staying in Chicago. He loves it here and likes playing for the Bears. Yet actions speak louder than words. Everything up to this point suggests nothing short of making the 27-year old one of the highest-paid receivers in the NFL will be enough to keep him in town long-term. People can debate whether he’s deserving of that price tag or not.

One thing is for sure though. Robinson doesn’t fear leaving. In fact, he may already have designs on where he’d like to end up next. For the most part, the receiver has been cryptic about his possible intentions. Yet as the calendar has turned to March and free agency is just two weeks away, he’s becoming less subtle about it. While he’s open to any team that is willing to pay, it does seem like he has one in particular in mind. 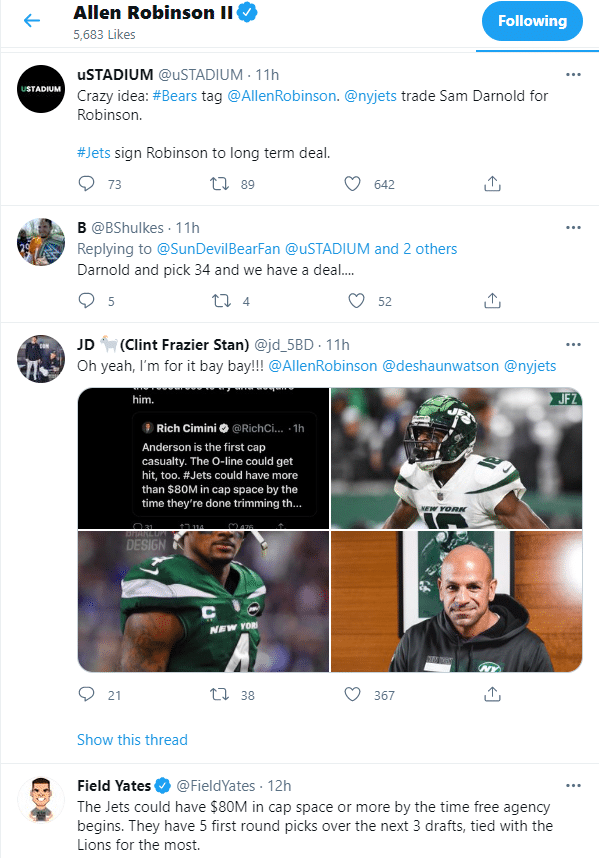 Quite a few liked mentions of the New York Jets, right?

That by itself obviously isn’t enough to make assumptions about them being his preferred landing spot. However, further evidence didn’t take long to surface. Robinson was a guest on The Cris Collinsworth Podcast recently where fellow player Richard Sherman asked him about the idea of playing for a team with no state tax (like Jacksonville) vs. a team with an enormous one like New York. Robinson didn’t just minimize that concern, he made it seem like the idea of playing in the Big Apple sounds awfully appealing.

“Something personally I’ve felt a difference of that has been exciting is playing in a little bit bigger market…Going from Jacksonville to Chicago. I remember when I signed to Chicago, I first got off the flight and I started going around in Chicago I was like, ‘Wow, this is a huge market.’ They love the Bears. A ton of energy. A sports city and I’m assuming New York is probably very similar to that when it comes to the Jets and the Giants and just being in the Big Apple. That’s where I train anyway in the offseason. So I’m up there a lot. I see it and feel it from a big city aspect.”

Quite a revelation, yes? So let’s review. Robinson wants a new contract. He wants to get paid big money. The Jets have over $67 million in cap space and a major need at wide receiver. Robinson trains there every offseason. If that weren’t enough, he also told Collinsworth and Sherman he has no qualms about playing with a rookie quarterback. Remember the Jets hold the #2 overall pick.

Sounds like way too much to be a coincidence.

Allen Robinson won’t get away that easily

Right now he has two hopes of landing in New York. The most direct path is for the Bears to let him hit free agency. Then he’s free to sign there. That doesn’t seem likely. While GM Ryan Pace didn’t come right out and say it, he made it clear enough the Bears are prepared to use the franchise tag if they feel they’re given no other choice. That means a somewhat more complicated plan would be needed to make it happen.

A tag-and-trade. Essentially Chicago tags Robinson and starts negotiations with the Jets who offer compensation for the receiver in the former of a draft pick or a player of equal value. Considering New York has three picks on Day 2 of the draft (one 2nd and two 3rds), it’s more likely the former. Once agreed, the Bears send the receiver east and New York then signs him to a long-term deal.

It’s not a crazy idea. Not nearly as much as it was 10 years ago.

Since 2018, five players who were tagged by their original teams ended up getting traded elsewhere. So it isn’t hard to see the Bears doing that. Especially if Allen Robinson refuses to budge on his contract demands. He’s a really good player but sometimes the better thing to do is save the money and get a solid draft pick back for them. Six days remain for Chicago to make a decision on the tag.

If he doesn’t stay put, where would you wager A-Rob goes next? You could sign up with PointsBet, who is partnered with the Chicago Bears officially, and maybe make some money off that. Just use the promo code Mockery to get two risk-free bets up to $2000.