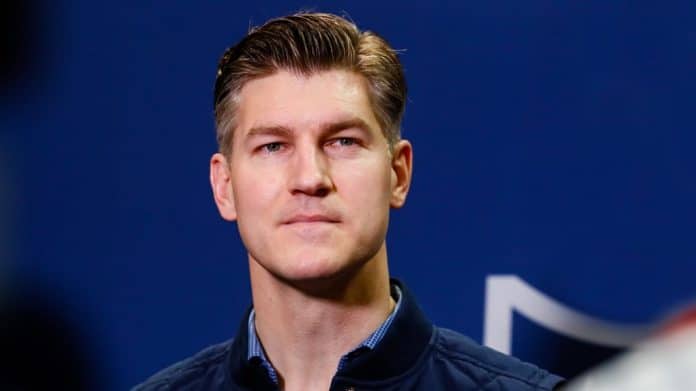 All of the focus during a season is on the coaches and players. That is only natural. However, when a team is floundering in mediocrity as the Chicago Bears continue to? Eyes start drifting further up the food chain into the front office. A place Ryan Pace has presided over as GM for the past six seasons now. This is his seventh and in all honesty, it doesn’t look that much different from most of the others.

This team isn’t bad. Far from it. The problem is it also isn’t good. It’s got clear flaws that are impossible to ignore. Flaws that can’t be explained away as simple bad luck. Pace has had a loyal group of defenders for several years. People who feel he is better than he gets credit for. In reality? They aren’t entirely wrong. There are a number of things the GM has done well during his time in Chicago.

It is more a case of the good failing to outweigh the bad. When that is the case, the better decision is to move on rather than keep trying with the same approach hoping for a different result. After over a half-decade, the Bears should know who Pace is by now.

GMs always tend to have areas of strength. Certain positions that they usually do pretty well at identifying talent. Pace is no different. For him, the areas of expertise center on the defensive line and running backs. While he’s built a good defense all around, the work he did up front deserves special mention. He drafted Eddie Goldman and Bilal Nichols. Two rock solid starters. He also signed Akiem Hicks, a Pro Bowler while also adding underrated contributors like Nicholas Williams, Mario Edwards Jr., and Angelo Blackson.

His work at running back might be more impressive though. Since 2015, the Bears have drafted six of them. Four ended up being Jordan Howard, Tarik Cohen, David Montgomery, and now Khalil Herbert. Howard was a Pro Bowler. Cohen topped 1,000 yards from scrimmage in 2018 and was an All-Pro punt returner. Montgomery might be the best player on the Bears’ offense. Herbert just ran for 172 yards in his first two games.

This is the primary argument a lot of people make in the pro-Ryan Pace camp. Among his biggest successes to date, the most impressive has to be his ability to find capable talent outside the first three rounds of the draft. It’s been consistent for years now.

This run is likely what has kept him employed up to this point. Finding starters in the later rounds is far more difficult than people realize. Having a GM that can do it is rare.

People always have their eyes on the big-ticket free agents during the offseason. That is to be expected. Everybody loves the huge splash. However, good GMs tend to make their money finding quality bargains. Players who don’t come with top names but end up contributing far beyond expectations. Pace has done this several times during his tenure.

All were acquired with cheap contracts. All ended up being solid contributors for at least one season. Hicks and Santos turned into outright steals. A good reminder of why Pace was widely considered one of the best pro personnel evaluators in the league during his time with the New Orleans Saints.

Here is a stat for you. Ryan Pace has overseen a total of seven drafts during his time in Chicago. Three of them resulted in the Bears making six picks or fewer. The standard amount is seven, don’t forget. They’ve also conducted two of the last three without a 1st round pick. This paints a clear picture. Pace isn’t just aggressive with his pursuit of players. He is almost too aggressive.

Here is another stat for you. Since 2015, the Bears GM has made 13 trades during the draft. No fewer than 10 of them were moves up the board. The players acquired in those trades?

While that list isn’t outright terrible, it also isn’t good enough to justify the 13 additional draft picks they’ve lost as a result. It is difficult to build a consistently good team when you’re so willing to throw away draft capital as he does. It also leads to financial problems if you don’t hit on enough of the picks you do have. Another issue the Bears are suffering from with a bloated payroll.

Pace was hired six years ago because the Bears ownership felt he might be able to get them out of the NFL dark ages and into the 21st century. This meant an end to the overreliance on defense and building a team that could actually score points. Instead? The man has only produced more of the same. Chicago has placed higher than 22 in points scored for a season once during his tenure. That was in 2018, a year guided by a defense that forced 36 takeaways and scored five defensive touchdowns.

The reality is the Bears have done a really poor job building their offensive infrastructure since Pace arrived. Of the 11 players he drafted on that side of the ball between 2015 and 2017, only two (Cody Whitehair and Tarik Cohen) made it to a second contract. Since then only James Daniels, David Montgomery, and Darnell Mooney have emerged as legitimate players from 2018 on. That isn’t good enough. Not even close.

Thus we come to the crux of the issue. While most would consider the signing/trading for/drafting of the quarterback to be the defining moment of a GM, others would argue it’s the hiring of the head coach. In this case, Ryan Pace doesn’t have much credibility. His first attempt landed John Fox. Though considerably experienced with prior success in Carolina and Denver, the coach was 60 by the time he came to Chicago. He’d also been fired after going 12-4 the season prior in Denver. Something that should’ve been a red flag.

The Bears never did better than 6-10 during his three-year run. So in 2018, Pace was given a second bite at the apple. This time he went with Kansas City Chiefs offensive coordinator Matt Nagy. It was felt his leadership and deep offensive background made him the perfect choice to fulfill Pace’s vision. Instead, the Bears remained largely on brand. Great defense, good special teams, and an offense that couldn’t score or move the ball with any consistency.

Pace has one winning season during his time as Bears GM. Two playoff appearances. No playoff victories. If legacies are supposed to be defined by success? Pace hasn’t had enough of it to justify further employment beyond 2021. That is the cold, hard truth.