Anybody who has paid close attention to the Chicago Bears media sessions over the past few days likely got some weird vibes. It started with wide receiver Marquise Goodwin questioning why the team didn’t take more deep shots against the Los Angeles Rams. Then offensive coordinator Bill Lazor all but confirmed that Justin Fields sitting was not a mutual decision by the coaching staff. That was entirely Matt Nagy.

It is becoming clear people aren’t happy with the current state of the offense, and the head coach is at the heart of it. Most of it centering on his decision to play Andy Dalton over Fields. While experience and intelligence are big strengths of Dalton’s game, it’s apparent the 11th overall pick makes things happen whenever he plays. He had a 9-yard throw to set up 3rd and 1 in the first quarter and then a 3-yard touchdown run later on.

The kid didn’t look overwhelmed by the moment.

Now it seems Nagy isn’t just facing internal questions from his own staff and the locker room. One source told SM on Wednesday that it went higher than that. All the way to the owners’ suite. While George McCaskey and Ted Phillips haven’t outright told the head coach to play Fields, there is genuine skepticism from their end on this plan Nagy continues to champion. Jeff Hughes of Da Bears Blog offered further confirmation of this.

You’re not wrong. And there are internal criticisms deeper than the staff. https://t.co/f1KMQdHkWS

Anybody with common sense has to know the season can easily spiral out of control if the Bears lose this weekend against Cincinnati. If they go 0-2, they’ll head to Cleveland to play a really good Browns team. That means possibly starting 0-3 with Las Vegas, Green Bay, Tampa Bay, San Francisco, and Pittsburgh all looming on the horizon. Does anybody think Dalton is capable of navigating that gauntlet?

Remember that McCaskey’s decision to bring the head coach and GM Ryan Pace back for 2021 was not popular. Not only with fans but also some inside his own organization. He took a gamble on those two. Thus far the only positive move they’ve made is finding a way to add Fields. It won’t matter much to their futures if the kid doesn’t play. Especially if the Bears continue to lose games.

Drafting the quarterback alone isn’t likely to save Matt Nagy from losing his job. He promised improvement from the offense. Then it managed just 14 points in another dispiriting game against the Rams. He has zero credibility in regards to that side of the ball. Now it seems the defense isn’t going to be there to bail him out this time. His lone path to saving his own skin is Fields.

The rookie won’t start this week and may not start in Cleveland, but there is a building momentum that barring a big breakout by Dalton? He is going to take over the starting job in the near future. One should probably be looking at the Week 4-6 window. If that doesn’t happen, then things could get ugly fast. 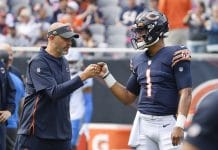 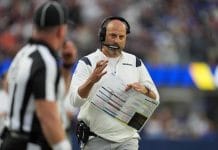 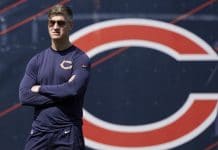 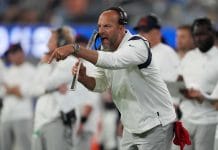 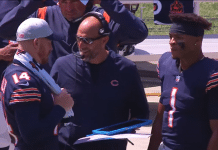