Discussions around the NFL draft for the Chicago Bears are difficult right now. That’s because nobody can say for sure what the team is going to do before. Everything this offseason will hinge on their plans at quarterback. If they grab one in March, it’s sure to impact their plans for April. On the other hand, they may have designs on drafting a QB instead, which would bring different challenges.

While the offseason is never something to predict, it appears the Bears brass at least have a game plan in mind. According to a source, their goal is pretty straightforward. GM Ryan Pace and head coach Matt Nagy hope to land a noteworthy veteran quarterback either via trade or free agency. After that, the plan is to use the draft to build around him with a heavy focus on the offensive line and wide receivers.

Translation? Fix the offense at any cost.

It isn’t any sort of master plan. The Bears know what their problem was in 2020. It’s the same problem it’s been for most of the past 60 years. The offense can’t score enough points to help what is routinely a good-to-great defense. Chicago was 22nd in points scored last season, and it would’ve been a lot worse if not for a late string of games against NFL-worst opponents. Every time they ran into a halfway decent defense, it was the same story.

They could hardly move the ball and couldn’t score. Until that changes, any prayer of competing for a Super Bowl goes out the window. Finding a quarterback is the obvious priority as it has been forever. Yet people should not presume that is the only problem. Both the offensive line and wide receivers had serious issues of their own.

This approach is easily predictable. At wide receiver, they have question marks everywhere. Allen Robinson is a free agent and no guarantee to return. Darnell Mooney had a strong rookie year but can’t be counted on to be a #1 guy. After that? It’s Anthony Miller, Javon Wims, and Riley Ridley. Not exactly a trio that inspires confidence.

The offensive line is no different. As a group, it was riddled with injuries. They allowed 36 sacks on the season and managed the 25th-ranked rushing attack in the NFL. There is a clear talent deficiency on that front five. Especially at tackle where Charles Leno remains average and Bobby Massie can no longer stay healthy. A shakeup is needed there.

This would explain a lot of recent chatter in the draft community.

They also met with Oklahoma State receiver Tylan Wallace who looked really good down in Mobile. There is no prediction of how things will ultimately end up. Yet the Bears brass at least has clear intentions. Find a veteran QB and surround him with as much help as possible. Then hope the defense has one more good year in it. 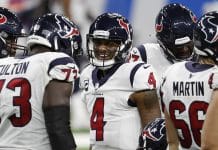