American Football, a story that turned its first page, give or take, 130 years ago. It was a match between the Allegheny Athletic Association and the Pittsburgh Athletic Club. From that day in 1892 to modern day 2021, the game has endured an incalculable number of changes and modifications to become what it is today. 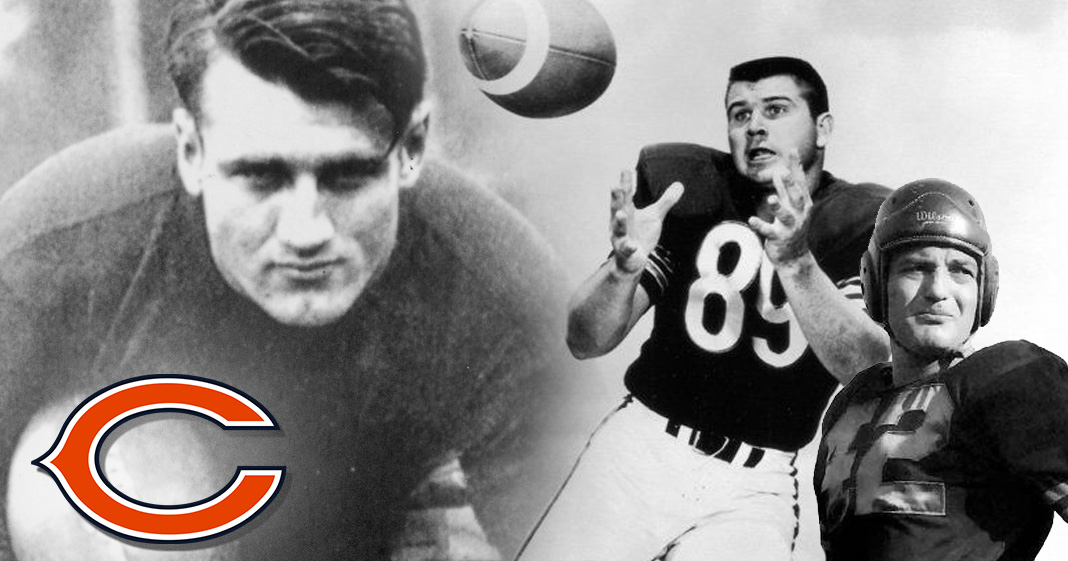 Founded in 1920, the Decatur Staleys spent one season in the small town before moving the franchise to Chicago and Cubs Park in 1921. Head Coach George Halas, known in Chicago as “Papa Bear,” was in charge of the franchise from that moment through 1968, as a player and a coach.

In 1922, the Staleys became the beloved Chicago Bears, a franchise worth $3.5 billion in 2021, highlighting one of the world’s largest fan bases.

For 51 years, the Bears would play their home games on the north side of Chicago. Players like Dick Butkus, Gale Sayers, Bronko Nagurski, Sid Luckman, and hundreds of others took to the gridiron between Clark and Addison, some without helmets until the mid-1940s when it became required. In 1971, the Bears moved to Soldier Field, where they remain today.

But the team itself stretches even farther than the heart of downtown. The Bears changed American sports’ cultural landscape forever, becoming a charter franchise that eventually became the richest professional sports organization in the world. Alongside Curley Lambeau and the Green Bay Packers, Halas’s Bears created a league that now sits in hundreds of millions’ hearts.

When it comes to championships, the Chicago Bears are one of the most decorated teams in NFL history. That being said, the overwhelming majority of their success came before the merge of the AFL and NFL in 1970.

In 1921, the Chicago Staleys captured their first title in a game that almost did not happen. The Staleys won the American Professional Football Association championship 10-7 over the Buffalo All-Americans. Just a few weeks prior, Buffalo defeated Chicago 7-6. Chicago demanded a rematch. Had the rematch not have taken place, Buffalo would have been named league champions because of the better record.

Today, Buffalo fans refer to the 1921 championship as the “Staley Swindle.”

In 1921, there were 21 total teams, four of which played in their inaugural year and three that folded following the season.

Much like the 1921 title, the 1932 title can be viewed as a tiebreaking game with several storylines. Not only was there no official championship game, but due to expected blizzard conditions and severely cold temperatures, the Bears hosted the Portsmouth Spartans inside of Chicago Stadium. The Bears, on a reduced-sized field measuring only 80 yards, captured a 9-0 victory. It’s worth noting that no field goals or drop kicks were allowed due to indoor conditions too.

Under the rules at the time, standings were based on winning percentages that excluded ties. The Packers controlled their own destiny but lost their final two games to the Spartans and Bears and were denied their fourth straight title.

The Bears and Spartans held 6-1 records, and both had tied each other twice that year. In 1924, the league outlawed championship-deciding postseason games but was forced into a “replay game” to determine a champion. The Packers finished second with a .752 winning percentage, and the Spartans finished third with a .750 winning percentage.

Arguably the team’s first “legitimate” championship came in 1933 at Wrigley Field against the New York Giants. In 1933, the NFL created the east and west divisions. The Bears won the west with a 10-2-1 record, and the Giants won the east with an 11-3 record. The Bears claimed home-field advantage for the title game due to the better win percentage.

The 1940 NFL Championship was one of the most famous football games ever played. The 8-3 Bears packed their bags and traveled out east to take on the 9-2 Washington Redskins. In front of 36,000 people, the Bears score 11 touchdowns and dismantled their opponent 73-0. The win remains the most lopsided victory in NFL history.

The Bears put up 28 points in the first half and never looked back. The game was so one-sided, Halas took his starters out in the second half. Behind the backups, the Bears still piled on points. In fact, so many touchdowns were scored, the game almost ran out of footballs following extra points kicked into the stands. Allegedly, refs asked Halas to run or throw the ball for the one-point conversion on the final two scores.

A familiar site and opponent for the Bears’ second consecutive title defeated the New York Giants at Wrigley Field 37-9. This game was played two weeks after the attack on Pearl Harbor, and just over 13,000 attended. That was the smallest amount of fans to attend an NFL title game.

Bob Snyder kicked three field goals in this game, and RB Norm Standlee rushed for two scores in the second half.

With 35,000 expected to attend, the grandstands’ tickets cost $4.40, and tickets for the bleachers were $2.20. The Bears were officially the first team in the NFL Championship era (1933) to win back-to-back titles.

Following a 14-6 loss in the 1942 championship game at the hands of the Washington Redskins, the Bears had their revenge in 1943 with a 41-21 win at Wrigley Field.

Led by QB Sid Luckman and his five touchdown passes, arguably his best game in a Bears uniform, 34,320 fans went home happy for the third time in four seasons.

At one of the most famous venue’s sports history, the Polo Grounds in New York City, the Bears defeated the New York Giants for the third time in championship games 24-14.

A Sid Luckman 19-yard TD run in the third quarter ended up being the difference, putting the Bears up 21-14. The record-shattering 58,346 fans in attendance stood for the next nine years.

Another year, another NFL Championship against the New York Giants at Wrigley Field. At the time, NFL Commissioner Pete Rozelle asked George Halas to move the game to Soldier Field because of the increased seating capacity. Halas declined, and the game was played at Wrigley. It would also be the fifth, and final NFL Championship played here.

Behind a stellar defensive effort, the Bears won 14-10.

If they aren’t the greatest team in NFL history, they are certainly top-three. The 1985 Chicago Bears dominated from start to finish, finishing the regular season 15-1 behind nine pro-bowlers, 11 AP All-Pro selections, and a defense that allowed ten total points in three postseason games.

Behind by Head Coach Mike Ditka, Running Back Walter Payton, William Perry, Defensive Player of the Year Mike Singletary, and many more, the Bears shut out Giants 21-0 in the divisional round, shut out the Rams 24-0 in the NFC Championship, and dominated the New England Patriots 46-10 in the Super Bowl.

In the first half, the Bears defense held the Patriots to 21 total offensive plays. Only four of those plays resulted in positive yards! As far as running the ball, the Patriots leading rusher was Fullback Tony Collins. Collins had four yards on three carries. Offensively, QB Jim McMahon completed 12 of 20 passes and rushed for two touchdowns in a win.

In total, the Bears defense allowed 198 points in 16 regular-season games. Offensively, they were second in the league in scoring, averaging 28.5 points per game. Their 258 point differential is the third highest in NFL history.

The numbers back it up. This was the greatest football team in NFL history.

The Bears franchise has played in 37 official postseason games and has a record of 17-20.  They have played in six wild-card games, 14 divisional round games, five conference title games, and two Super Bowls.

Of all the Bears’ teams in the postseason, they have played the New York Giants the most with eight total matchups. They hold a 3-2 record in championship games against New York.

The Bears have 30 Hall of fame players. That is the most of any team in the NFL.

The Bears franchise celebrated 100 seasons of professional football in 2019-2020. An incredible accomplishment, not only in professional sports but in the business world too. While it’s unknown the exact number of companies that have lasted 100 years, it’s far less than those that haven’t.

In the NFL, only three teams have been around for over 100 years: The Chicago Cardinals (now the Arizona Cardinals), the Green Bay Packers, and the Chicago Bears. The New York Giants will be the fourth team to celebrate come 2025.

To kick off the 100th season, the Bears hosted “Return to Decatur,” the franchise’s original home. The event featured a presentation on the team’s history and comments from General Manager Ryan Pace and Head Coach Matt Nagy.

For every home game, the team gave out 20,000 bobbleheads of team legends to fans. For both home preseason games, the team handed out Red Grange and Bill George bobbleheads.

The team also used each home game to honor all ten decades of Bears’ football.

The team finished the year 8-8 and missed the postseason.

Who is the best player in Bears history?

The Bears have the most hall of fame players of any team in the league. Ahead of their 100th season, they put together a list of their 100 best players. It’s hard to argue against Walter Payton, who was placed at the top of that list.

Are the 1985 Bears the best team in NFL History?

They are top-five. The other teams that come to mind are the 1978 Super Bowl Champion Steelers and their “Steel Curtain” defense, the 1989 San Francisco 49ers with Joe Montana and Jerry Rice, the 1991 Washington Redskins with Joe Theismann, and the 1962 Green Bay Packers.

Who is the best quarterback in Bears history?

As far as stats are concerned, there are only two QBs that you can put into this category: Sid Luckman and Jay Cutler. Yes, I know that Jim McMahon won a Super Bowl, but he was far from why that team won it all. Luckman won four championships.

Is Devin Hester a Hall of Famer?

In a word, yes. Hester is the best kick returner of all-time. Not only did he return kicks, but he returned punts, two very different positions with two very different approaches in football. Hester finished his career with 16 touchdown returns, four pro-bowl selections, and three First-Team All-Pro selections.

Who is the next Hall of Fame Bear?

If it’s not Devin Hester, Charles Tillman is the next guy in line. Tillman changed the game of football with his famous “peanut punch,” a way to force a fumble by physically punching the football out of a player’s grasp. Tillman did not make many pro bowls in his career (2) and was often snubbed because of players putting up career years.

What is the future of the franchise’s ownership?

The Chicago Bears are valued at $3.5 billion in a growing industry. The Halas/McCaskey family had owned the Bears since its beginning in 1921. In other words, the odds of the McCaskey family selling the team are next to none. To be honest, why would they? Just because fans are upset with them doesn’t mean they have to sell the team.

How close are the Bears to their next Super Bowl title?

Closer than many think. Overall, minus their top-10 draft picks, the Bears have drafted decently over the last few seasons and have signed some nice players in free agency. The issue is and always will be the quarterback position. Until the Bears can lock down a sure-fire NFL QB to display modern-day NFL offense, they will have no shot at a title.

What is the future of the Bears at Soldier Field?

The Bears rent the space from the city. Many teams own their stadiums, but a lot of teams play in smaller cities with space available to put up a stadium. Downtown Chicago is packed with buildings, but there have been rumblings of the team packing up and moving to Arlington Heights. While this is strictly a rumor, it would make sense financially.