Chicago Bear fans just cannot get enough of the recent trade rumors surrounding Green Bay Packers star QB Aaron Rodgers and his reported unhappiness with the organization. It’s been rumored for a couple of weeks now that Rodgers is livid with the team for their recent moves such as drafting Utah State QB Jordan Love in the first round of the 2020 NFL Draft without telling him, and more recently, cutting WR Jake Kumerow. Who knows why Kumerow was so important to Rodgers, but it didn’t help matters when he was cut.

With the Bears trading up to draft Ohio State QB Justin Fields, there is a sense of new optimism within the organization and throughout the entire fanbase. If Fields is who we think he is and can play as he did at OSU, there is an argument to be made that if Rodgers leaves Green Bay, Chicago will have the best QB in the NFC North. That would be something that you probably have never heard in your lifetime, no matter how old you are reading this. So it’s quite understandable why fans are excited for the future of the team, even if their general manager could be incompetent.

No Substance To Beleive Rodgers Leaves

As I outlined in detail earlier this week, there is no substance behind the reason to think that Rodgers leaves Green Bay. First off, he has not publicly come out and denied that he wants to leave, but he also hasn’t told the organization that he is out. Texans QB Deshaun Watson openly let the organization know that he wants to be traded, so we knew that there was a fire under that smoke. In this situation, there is no fire that we can see producing the smoke. The Packers, however, have come out and said that they plan to do everything possible to keep Rodgers in Green Bay and have absolutely zero intention of trading the All-Pro QB. GM Brian Gutekunst has taken some serious heat from the media over the report that Rodgers wants him fired and has compared him to the late Chicago Bulls GM Jerry Krause. Despite that, Gutekunst has defended Rodgers and has said he is committed to him as the QB going forward.

Late last week on Audacy Sports “You Better You Bet,” NFL Insider Pete Prisco let his feelings be known on the issue and what he thinks happens between the Packers and their QB.

“They’re not going to trade him. Period. End of story. That’s what I’ve been told through people, that there is no way they are trading him. Nor should they.”

Prisco is right. For one, Rodgers is still under contract with the team and would pass up on a fortune if he decides not to play for the Packers next season. If he sits, the team would lose but so would he. It would be a real lose-lose situation, and both parties want to avoid that. Rodgers has also always been a man that cares about the legacy he leaves behind in Green Bay. This type of move would tarnish that legacy. Prisco also isn’t a fan of a QB making demands of his team.

“I think this is more about the money and contract than it is about wanting the general manager out or not being happy with the organization. Look, a QB should have no right to tell a GM that he wants Jake Kumerow around because he’s his buddy. That’s not his job. His job is to be able to go play quarterback, not to assemble the roster. So I think that stuff is petty.”

This is obviously an old-school way of thinking, but the point is pretty solid. While Rodgers has earned the right to have a bigger say in the organization, it is not up to him to make roster decisions for the team. If he didn’t like what the Packers were doing, he shouldn’t have signed his last contract with them and negotiated for more money. Plenty of other teams would have let him come in for a massive amount of cash and a big say in their plans. So maybe this is all about just wanting to be the highest-paid QB in the NFL.

Prisco Has No Doubts

When a guy is as connected as Prisco is within the Packers organization, you might want to listen to what he says. It’s always been known that he is a huge Packers guy and knows the team inside and out. If there was any fire under the smoke, he would have been one of the first to break the story.

“I think in the end, what it comes down to is, he looks at the contracts and says look he’s the MVP and he’s not making the same amount of money as some of those other guys are. That’s where the problem is. They’ll resolve it, they’ll figure it out. He’ll play in Green Bay. I have no doubt in my mind he’s playing in Green Bay.”

Simple as that. Make the man the highest-paid QB in the NFL. With the terror he has caused the Bears over the years, this would not be the best news for the long-suffering fans of Chicago. But, there’s always a chance he leaves. Hold out hope my friends, for one day it will happen. Just maybe not this year. 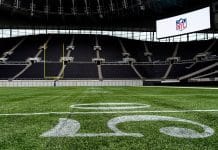 Chicago Bears May Have Name In Mind For New Stadium 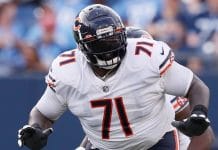 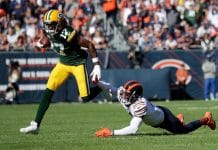 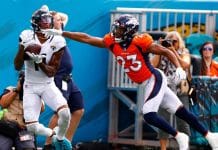