The NHL and NHLPA will have a board meeting on Thursday to iron out crucial details for the upcoming season.

While the NBA and their players have officially agreed upon a target start date of December 22 for the 2020-21 regular season, the NHL still has a long way to go. January 1 has been the target start date for a couple of months now, but the NHL and NHLPA have been waiting on a recommendation to the board of governors before all the details can be finalized. NHL deputy commissioner Bill Daly issued a statement to all 31 teams on Tuesday stating that “progress towards finalizing a recommendation to the board of governors is being made”, and with a board meeting on Thursday, a recommendation could be ready.

The NHL and NHLPA continue to work on next season. The NHL will update its governors on a call tomorrow. Much work to do on how the league will launch 20/21, overall protocols, and how many games. Jan 1 is still the target, so decisions need to be made in the very near future.

TSN’s Elliotte Friedman stated on Tuesday that the NHL is looking at shortening the 2020-21 regular season to between 56 and 72 games. Different sources have heard different lengths, but an 82-game season does not appear to be on the table. Obviously, the later the season starts, the less games will be played. The NHL wants to award the Stanley Cup no later than July 15 to avoid another shortened season in the future.

As for the possibility of hub cities for next season, commissioner Gary Bettman stated earlier in the week that he would not ask players to go back to a bubble for an entire year. Bettman and the NHL are now looking at teams possibly playing in their home arenas and could use a hybrid style similar to the Return To Play plan that was in effect during the 2020 postseason.

“You’ll play for 10 to 12 days,” Bettman said during the 2020 Paley International Council Summit on Tuesday. “You’ll play a bunch of games without traveling. You’ll go back, go home for a week, be with your family. We’ll have our testing protocols and all the other things you need. It’s not going to be quite as effective as a bubble, but we think we can, if we go this route, minimize the risks to the extent practical and sensible. And so that’s one of the things that we’re talking about.”

Friedman adds a couple minor details about the 2020-21 regular season in his blog that can be found below. 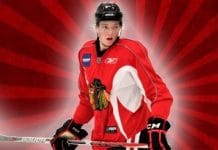