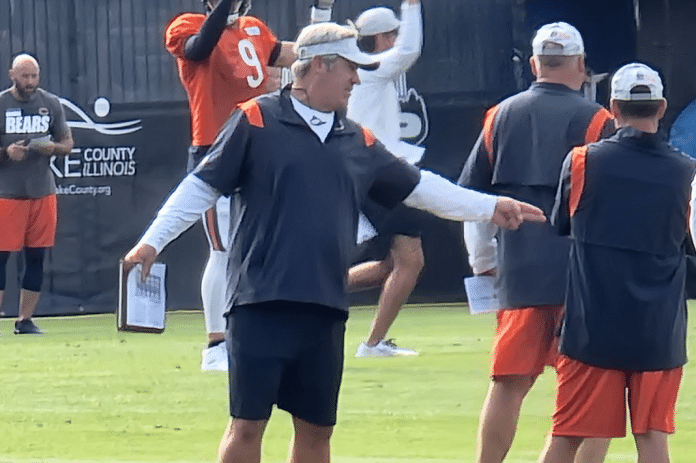 Matt Nagy isn’t dead yet. He’s 3-3 this season and there is still a window to push the Chicago Bears through to another playoff run. That would most likely save his job and result in an extension. At the same time, he’s also in great danger. The toughest part of the schedule is looming with Tampa Bay, San Francisco, Pittsburgh, and Baltimore up next. His offense is arguably the worst in the NFL too. This feels like something that can get out of control in a hurry.

If things go sideways, it’s hard to imagine George McCaskey being able to justify keeping Nagy in 2022. Not in the final year of his contract. So what happens if the trigger is pulled and he’s dismissed? The Bears will have to find a replacement. In this case, a source informed SM that the current feelings are the top brass will prioritize somebody with prior head coaching experience. Somebody proven.

A few names mentioned as possibilities?

Doug Pederson was one. Not surprising. He’s still only 53-years old and won the Super Bowl for Philadelphia in 2017. He also developed Carson Wentz into a successful quarterback. While he does come from the same coaching tree as Nagy, he has proven far superior in most aspects. Another name to watch is Jim Harbaugh. A lot of Bears fans won’t like that but the belief is he had lots of success in the NFL, has deep ties to Chicago, and is having one of his best seasons at Michigan (6-0 as of writing this). There are likely others.

It’s felt that there is hesitation to try a first-time head coach again after what has happened with Nagy. It isn’t a route that has done too well for the franchise. Dave Wannstedt and Dick Jauron are well-known examples. Lovie Smith was too. While he did have more success, he like many others couldn’t fix the offense. This is something they want to get right. Find a head coach who has developed QBs in the past.

Matt Nagy has just under three months to change minds

He needs one of two things to happen. Either the Bears must post a winning record and make the playoffs or Justin Fields has to flourish. Right now, neither of those things is happening. Chicago has yet to be a truly good team this season. In fact, they’ve been beaten by double digits every time. There aren’t many cupcakes in this schedule. So he needs to start changing that.

As for Fields? He has come a good distance from his disastrous first start against Cleveland. He looked decent in the loss to Green Bay but there were still a number of rookie moments he must improve. Part of the issue many have is how the system doesn’t seem to be creating a lot of easy completions for him. That makes it hard to find a rhythm. Matt Nagy was supposed to be somebody who could do this.

Almost four years in now and that hasn’t been the case.

There is a long way to go before any definitive decision is made. Don’t expect the Bears to fire Nagy before the end of the season. They’ve never done it before and this team isn’t quite bad enough to experience the necessary collapse to change that. It is clear though the team is keeping their options open and have ideas about how they’d approach a change.